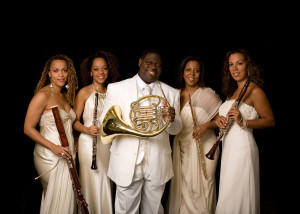 Wind quintet Imani Winds played an engaging and impressively precise concert at Long Wharf Theatre during the International Festival of Arts & Ideas in June, one that conveyed a “Passion for Bach and Coltrane.”

Some fans have this coming Tuesday’s date circled on the calendar, when the Jeff Scott-led quintet will return to New Haven for a Yale School of Music concert celebrating dance in Morse Recital Hall at Sprague Memorial Hall on College Street, as part of the Oneppo Chamber Music Series.

The 7:30 p.m. concert will feature a variety of music from multiple Latin American composers, Imani members and traditional dance music, notes a Yale release. Tickets start at $26, although student tickets are $13. Call 203-432-4158 or visit the box office at 470 College St.

Imani Winds tends to impress its first-time viewers with that precision, musicality and entertainment value.

“I never take what we have or what we’ve accomplished for granted,” Scott said via phone the other day, “because no matter where we go, most people in the audience will say, ‘Wow, I didn’t know what to expect; I never heard this type of ensemble before.’”

Yes, we said a dance theme, but no actual dancers, right?

“Now, how would you just assume that, Joe?” laughs Scott. “I might just show up in a tutu.”

That’s a funny line coming from such a classical musician. This is a Brooklyn guy with a graduate degree in music who has played in Broadway orchestras and on movie soundtracks, a guy whose group is on a mission to expand the repertoire of wind quintets by thinking out of the box.

Its members are resurrecting a previous Legacy Commissioning Project to that aim, drawing from jazz, avant-garde and other diverse composers for their perspective.

Imani represents diversity itself by its racial composition and ability to fuse European, African, Latin American and American influences. But back to Tuesday’s program which Scott sums up as “dance-derived works, based on particular dance styles.”

There will be a piece by Imani flautist Valerie Coleman called “Tzigane,” a musical journey through Eastern Europe by way of the Romani.

Coleman is a prolific composer, said Scott, who writes pieces via commissions for others and for the quintet itself.

“She and I both think of writing for the quintet as sort of filling the quota for what’s needed in the repertoire,” Scott said, noting that there was almost nothing written for wind quintets before the 20th century.

“We don’t have Brahms, Beethoven ... the Strausses, the Mahlers,” he said. “We’re starting really from scratch. So there’s a need for, say, a piece that’s a little more romantic, a piece that opens a concert, a piece that closes a concert ... We tend to write pieces to fill that need.”

It’s the same idea for wind quintet pieces that reflect the gypsy tradition, which Coleman attempts to address in her piece.

“It’s not to be compared necessarily to the Ravel piece of the same name ... but it fills that (idea), a piece that really digs into that particular style in a very wind-perspective sort of way.”