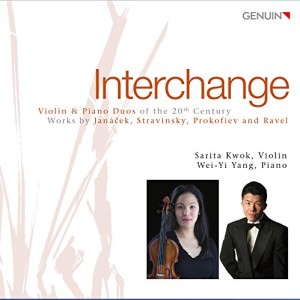 Piano faculty member Wei-Yi Yang ’95 MM, ’96 AD, ’99 MMA, ’04 DMA and violinist Sarita Kwok ’05 MMA, ’06 AD, ’09 DMA have released their first album together on the German record label Genuin. The recording, titled Interchange: Violin and Piano Duos of the 20th Century, features works by Janacek, Prokofiev, Ravel, and Stravinsky. The album was released on Jan. 29, 2016, and is described as:

"a balancing act that both young musicians pull off splendidly, connecting long musical lines and palpably enjoying relentless rhythmic repetitions. They provide for moments of stillness as well as veritable fireworks. So it comes as no surprise that both musicians have drawn international acclaim - competition juries and the press have not stopped singing their praises! We experience first-hand the moment the lights go out and the musicians intone the first notes of Ravel's seductive blues..."