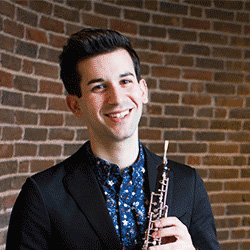 Cohen Mann was recently heard in the Yale in New York concert, With Pluck: Music for Harp, in a performance of Pasculli's Omaggio a Bellini with harpist Noël Wan in Carnegie Hall's Weill Recital Hall. He can also be heard in the Competition Winners Concert on May 10, 7:30pm at Morse Recital Hall in Sprague Memorial Hall.

More about Ron
Ron Cohen Mann is an Artist Diploma candidate at the Yale School of Music, studying with Stephen Taylor. He completed his Master of Music at Mannes School of Music, studying with Sherry Sylar of the New York Philharmonic, and his Bachelor of Music at the University of British Columbia under the tutelage of Beth Orson, where he was awarded the UBC Medal in Music.

Cohen Mann was a prizewinner at the Orchestre Symphonique de Montreal Standard Life Competition 2014, and the winner of the Yamaha Young Performing Artists Competition 2013 and Ben Steinberg Musical Legacy Award 2015. He is a current semi-finalist in the Ima Hogg Competition 2016, in which he will compete for the opportunity to perform a concerto alongside the Houston Symphony in June 2016. He maintains an active solo and chamber music schedule through frequent recitals.