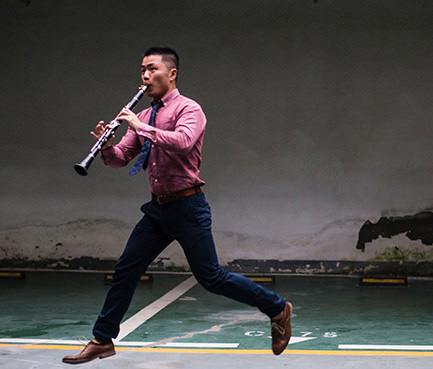 Clarinet alumnus Mingzhe Wang ’03 MM ’06 MMA '12 DMA has been appointed Associate Professor of Clarinet in the College of Music at Michigan State University in East Lansing, MI. Wang will join the faculty at MSU in August 2016.

A prizewinner in the National Society of Arts and Letters Woodwind Competition (1999), the Orchestral Instrument Competition (2001), and a recipient of the Tennessee Arts Commission's 2013 Individual Artist Fellowship award, Mr. Wang is committed to promoting both the music of our time and the classics. He performed the Chinese premiere of Elliott Carter’s Hiyoku and has worked closely with composers such as Ezra Laderman, Martin Bresnick, Krzystof Penderecki, Aaron Jay Kernis, Lee Hoiby, Paul Schoenfield and Chen Yi. In addition, he has performed on period clarinets with prominent groups such as The American Classical Orchestra and the Clarion Music Society Orchestra.

As a chamber musician, Mr. Wang has collaborated and continues to work with some of the most prominent young artists of today. Mr. Wang's performances have been broadcast on China’s Central Television, New York’s WQXR, Nashville's WPLN, and many public radio stations across North America.

Apart from being an active performer and educator on the clarinet, Mr. Wang is a seasoned singer. He was the vocal soloist in Chen Yi's Percussion Concerto accompanied by the Nashville Symphony Orchestra. He has performed in choruses throughout the United States, as well as internationally in Korea, China, the United Kingdom, and Hungary. As a founding member of the Yale Schola Cantorum, he has worked with renowned conductors such as Simon Carrington, Helmuth Rilling, Sir David Willcocks, James MacMillan, Sir Neville Marriner, and Kathy Saltzman Romey.

Mr. Wang is currently an associate professor of clarinet at Austin Peay State University in Clarksville, Tennessee. Previously, Mr. Wang taught clarinet to Yale undergraduate students and served on the faculty at the Neighborhood Music School in New Haven, Connecticut. He is a founding member and co-principal clarinetist of the Gateway Chamber Orchestra and co-founder and member of Trio Séléné. He also performs with Nashville Opera Orchestra and is a sublist member of the Nashville Symphony.