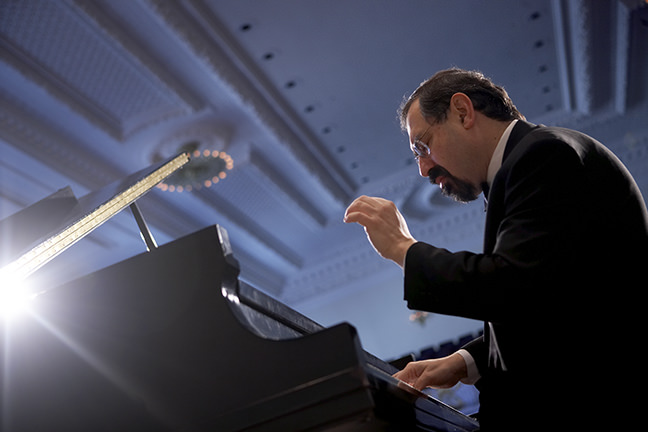 Boris Berman recently said that his Oct. 24 Horowitz Piano Series recital is "another step in (my) exploration of Prokofiev." Berman, a faculty pianist at YSM and the series' Artistic Director, has recorded the composer's complete solo piano music, published a book titled Prokofiev's Piano Sonatas: A Guide for the Listener and the Performer (Yale University Press), and served as an editor of Shanghai Music Publishing House’s critical edition of Prokofiev’s piano sonatas. In April 2016, Berman organized "Prokofiev at 125," a concert in which his students performed transcriptions of the composer's ballet music. Reviewing an all-Prokofiev recital Berman gave at New York's 92nd Street Y, and with the pianist's recordings in mind, New York Magazine's Peter Davis offered, "For a grand tour through the total Prokofiev, I can't imagine a more observant or articulate guide."

For his Oct. 24 recital, Berman has paired Prokofiev's late piano sonatas with Haydn's "London" Sonatas. In Prokofiev's piano music, Berman said, he sees connections to the composer's immediate predecessors, and to the Classical style—"perhaps more so with Haydn than with Mozart." The three "London" Sonatas (Nos. 50-52), Berman said, are very different from one another, and some of that music indeed looks forward, beyond Classicism. The Prokofiev sonatas—Berman will perform No. 9 and No. 7—are also different in their personalities, the former more introspective and the latter more muscular, in Berman's words.

Personality will be very much on display in Berman's recital, in historical terms. When Prokofiev "burst onto the concert scene," Berman said, the composer and his music shocked some concertgoers. "Some of his premieres were downright scandalous," Berman said.

In addition to his recital, and to celebrating Haydn and Prokofiev, Berman is always eager to champion the Horowitz Piano Series, which he said is "one of very few piano recital series in the country."

"Some of the greatest musicians of our time" have performed as part of the Horowitz series, he said. Yale is home to the papers of legendary pianist Vladimir Horowitz, who died in 1989. Guest performers on the Horowitz series have included Emanuel Ax, Ran Dank and Soyeon Kate Lee, Angela Hewitt, Olga Kern, Radu Lupu, and Murray Perahia, to name just a handful. The series, Berman said, is "a great treat for all of us, right here on campus."