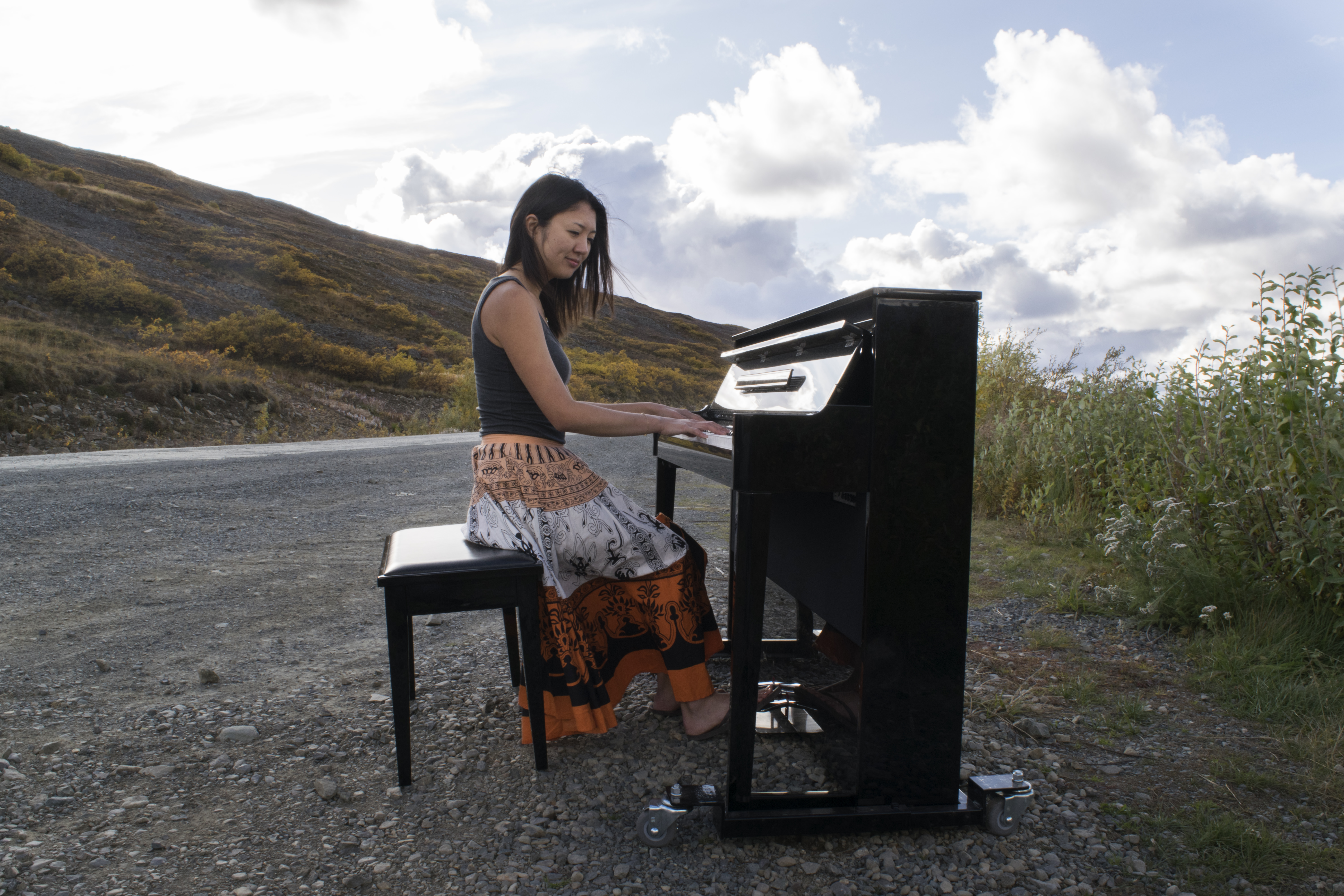 Political divisions have had many musicians thinking about the artist’s role in society. “As a musician, what is the way forward?” pianist and YSM alumna Miki Sawada ’14AD began asking herself two years ago. “Playing piano like I’d always played piano was no longer an option.”

Sawada, an accomplished concert performer and music educator, decided that the way forward was to use the piano as an instrument of healing, a gathering place where people of all backgrounds could enjoy music together. The way forward was to bring performances to people who may not ordinarily have access to them.

In August 2017, Sawada launched the Gather Hear project, which involved, to begin, touring Alaska for three weeks in a van with a piano and a filmmaker, documenting the journey and giving a total of 25 performances in the cafés, bars, parks, and schools of largely rural communities. Eventually, Sawada intends to tour all 50 states.

“Alaska has an almost mythical quality,” Sawada said. The state’s vastness and the sparseness of its communities appealed to Sawada, and the close-knit nature of people in rural areas allowed her to find collaborators. In addition to her own solo playing and engaging with audiences, Sawada connected with a young local musician at each venue. She ended up performing with students of all levels, from beginner violinists to high school pianists.

Booked into unorthodox and often noisy venues, Sawada’s biggest fear before embarking on the tour was that no one would want to sit quietly and listen. “The night before I left, I got cold feet,” she said. She thought, “What if no one wants to hear me?” But her experience was quite the opposite. “There was total silence,” she said, noting “a change in the room” when she began to play, wherever she was.

While the Gather Hear Tour was sparked primarily by a desire to connect with diverse audiences, Sawada had long been interested in taking classical music beyond the confines of the concert hall. “I always envied my friends who could take their instruments and perform in pop-up concerts,” she explained.

While taking a piano on tour requires some extra labor, Sawada has shown that it can be done. The instrument with which she toured Alaska is a hybrid keyboard with no strings to tune, equipped with its own amplification. However more difficult the instrument is to transport than a flute, the piano is a necessary, central focus of the project — a gathering place where people are encouraged to stop and listen, and to participate in the music-making.

Following the Alaskan tour, Sawada turned her attention to West Virginia, where Gather Hear performances featured a new work by composer and fellow YSM alumnus Brendon Randall-Myers ’14MM, a West Virginia native. Randall-Myers’ new work, A Kind of Mirror, combines classical repertoire with original music. Created to reflect the mission of the Gather Hear project, A Kind of Mirror calls for audience participation, with theatrical prompts shaped with the help of director Daniel Pettrow. At one point, an audience member is asked to make tea on stage, and the ending of the performance involves a large amount of bubble wrap. While performances of A Kind of Mirror are somewhat structured, there is room for collaboration. “The show is built in a way so that piano players in the audience could potentially, spontaneously take the stage,” Sawada said, “or if I meet a classical musician in town when I arrive at a tour stop, I could work a collaborative performance with them into the show.”

Sawada seems flexible when it comes to life on the road, which she has found enjoyable. States on the radar for future Gather Hear tours include Missouri, Michigan, and Florida. Sawada may even attempt to tour all three within the next year. She is in no rush, however. “If it takes 50 years, that’s fine,” she said. “It will be interesting to see how the project changes over time.”