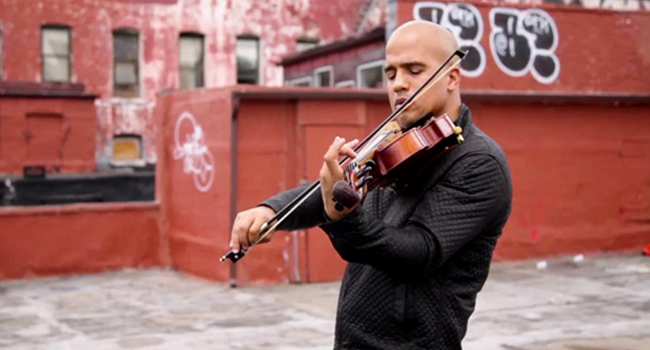 The 2019 Norfolk Chamber Music Festival season may be winding down but Director Melvin Chen is already thinking ahead to next season — in fact, seasons beyond that — with an exciting new program. The Festival is taking its longtime commitment of presenting new works to another level and is commissioning a new piece for each of the next three summers.

Funded initially by the Desai Family Foundation, a new work will premiere each summer at the Festival, and will include a week-long residency with the composer. Violinist/composer Daniel Bernard Roumain — known simply as DBR — will be the first commissioned artist.

Commissioning new, potentially multi-media, works is a logical next step for the Festival, says Chen. “Generally as a chamber music festival you want to present not only the works that have already been written, but help add to the repertoire,” he says. “Chamber music is not something fixed but something evolving and growing, and we need to participate in that.”

A quick look at DBR’s musical bio shows why Chen was interested in working with him for Musical Bridges. His collaborations to date include Philip Glass, Bill T. Jones, Savion Glover and Lady Gaga, according to his website. He won an Emmy for "Outstanding Musical Composition" for a collaboration with ESPN. He also recently created the musical score for The Just and the Blind, a collaboration with spoken word artist and writer Marc Bamuthi; and he’s currently at work on Cipher, a pocket opera for the Philadelphia Boys Choir based on the incarceration of young black boys.

“His writing has two main themes,” says Chen, who has known DBR for a while. “One, he combines classical music with other American genres such as hip hop and other influences, and the other theme is social justice. I expect his work to combine all those influences. I think his piece will be quite powerful.”

The intent is to premiere the piece at the Festival but Chen hopes it will have a life beyond Norfolk. “With each commission we want to find commissioning partners, perhaps other festivals or other performing arts festivals, so the pieces can have a life that starts at Norfolk but can be presented and heard outside of Norfolk,” he says.

Chen anticipates that years two and three of the project will focus on non-western music and cultures in some way. “Other commissions have done this,” he says, “but I don’t know of any other multi-year effort that concentrates on this.”

The three-year funding from the Desai Family Foundation gives Chen a chance to build the program going forward. “In the ideal world it would be annual,” he says. “The idea of the initial three years allows us time to build momentum during the project and attract enthusiastic support for more commissions.”