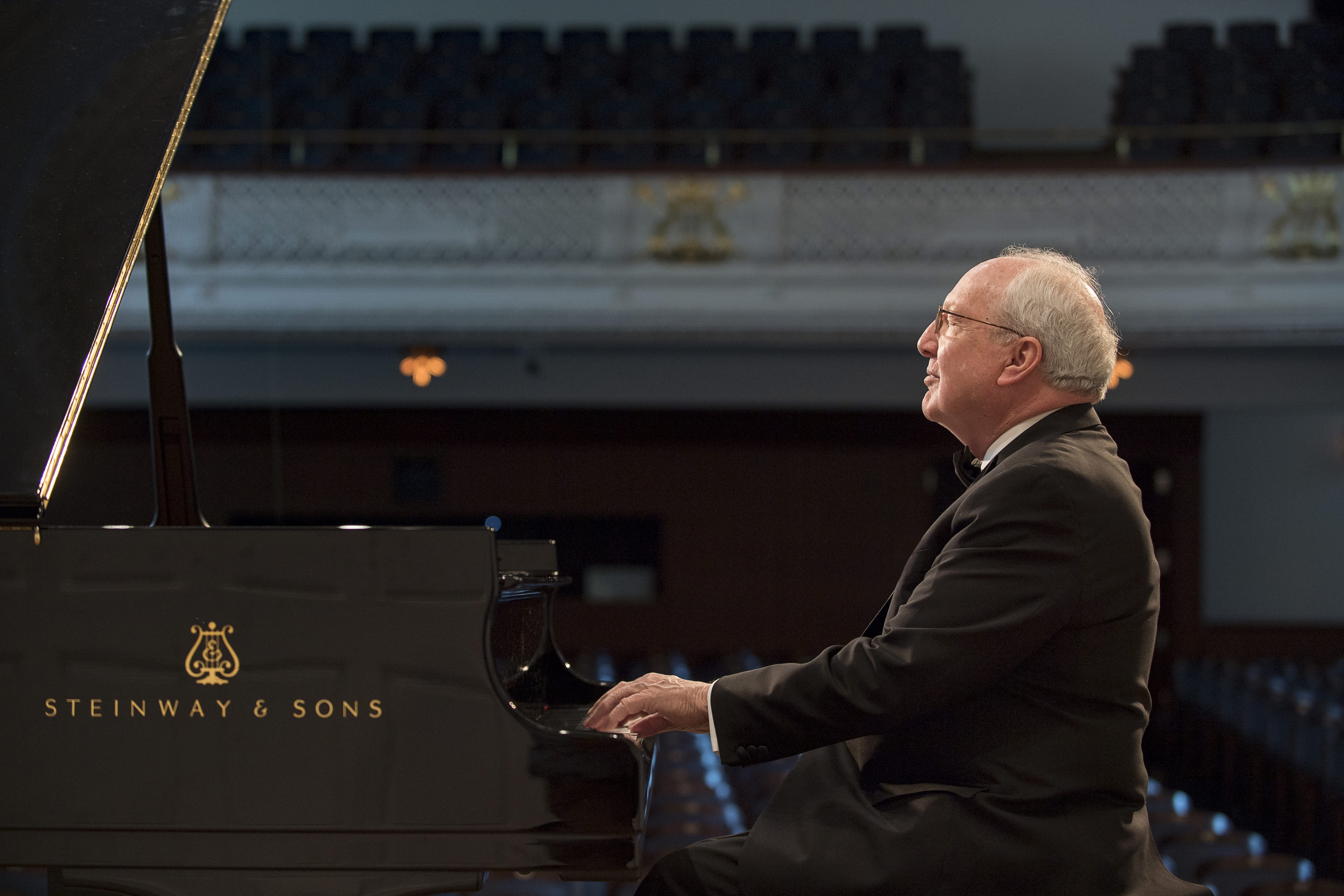 Yale School of Music faculty pianist and Dean Robert Blocker was introduced to the music of Bach as an elementary school student in South Carolina, learning from and singing with part-time music teachers in the cafeteria. Today, in spaces created in a demanding administrative schedule, Blocker finds comfort and authenticity at the piano.

Tonight, Blocker will perform a program built on reflection and appreciation. Recounting a trip to Vienna during which he visited Beethoven’s and Schubert’s grave, Blocker lamented the absence of a place where admirers can pay similar respect to Mozart, whose exact burial site in Vienna’s St. Marx Cemeteryis unknown. Blocker said Mozart’s Piano Sonata No. 4 in E-flat major, K. 282, an early sonata that opens tonight’s program, is “one of my very favorites.” He’s performed Mozart’s music frequently, and tonight’s Horowitz Piano Series concert is another opportunity to pay respect to the composer and to share with audiences something of himself.

Perhaps thinking of his own experiences with those part-time music teachers in South Carolina, and about his own grandchildren, Blocker will follow the Mozart with Ravel’s Sonatine, Op. 40 and the fairy-tale based Ma Mère l'Oye (Mother Goose Suite) for piano four-hands. Ravel dedicated the Sonatine to his friends Ida and Cipa Godebski and the suite to their piano-playing children, Mimie and Jean. Faculty pianist Wei-Yi Yang will perform the second piano part, and faculty composer Martin Bresnick will read the text that accompanies the music. Programming Ma Mère l'Oye, Blocker said, was in part a reflection on what stories and sound can mean to a child.

Brahms composed his Liebeslieder Waltzes, Op. 52 for voices and piano four-hands. Tonight, Blocker will perform the composer’s arrangement for piano four-hands without voices (Op. 52a) with faculty pianist Melvin Chen. Blocker described the love-song waltzes as “incredibly joyful pieces” and said, “Without text you can take more liberties with how you want to express your music.” Brahms’ friend Clara Schumann described the pieces as “exceptionally fetching and delightful, even without the vocal parts,” according to notes in Blocker’s piano score.

Tying Blocker’s childhood to his place at the School of Music is a grouping of music that starts with and pays homage to Bach. “I’ve always loved the music of Bach,” Blocker said, “and I’m continually reminded of how adaptable it is.” He’ll perform "Wachet Auf, ruft uns die Stimme," the opening chorus from Bach's cantata of the same name, Busoni's arrangement of the music (which Bach based on a hymn by Philipp Nicolai) and faculty composer Christopher Theofanidis’ Wake Up, Called the Voice, a piece that borrows from and reimagines "Wachet Auf" and was written for and premiered by Blocker in 2016.

Blocker will close his recital program with a performance of the Modern Jazz Quartet’s “Rise Up in the Morning,” an arrangement of Wachet Auf, with percussionist Jisu Jung '19MM '20AD. “I was a devotee of (MJQ’s) music-making in the ’70s. What they did with Bach was just magical,” Blocker said.

It’s a program that reflects on youth, on the music that has informed Blocker’s life and work, and on the friends here at the School whom he considers family.