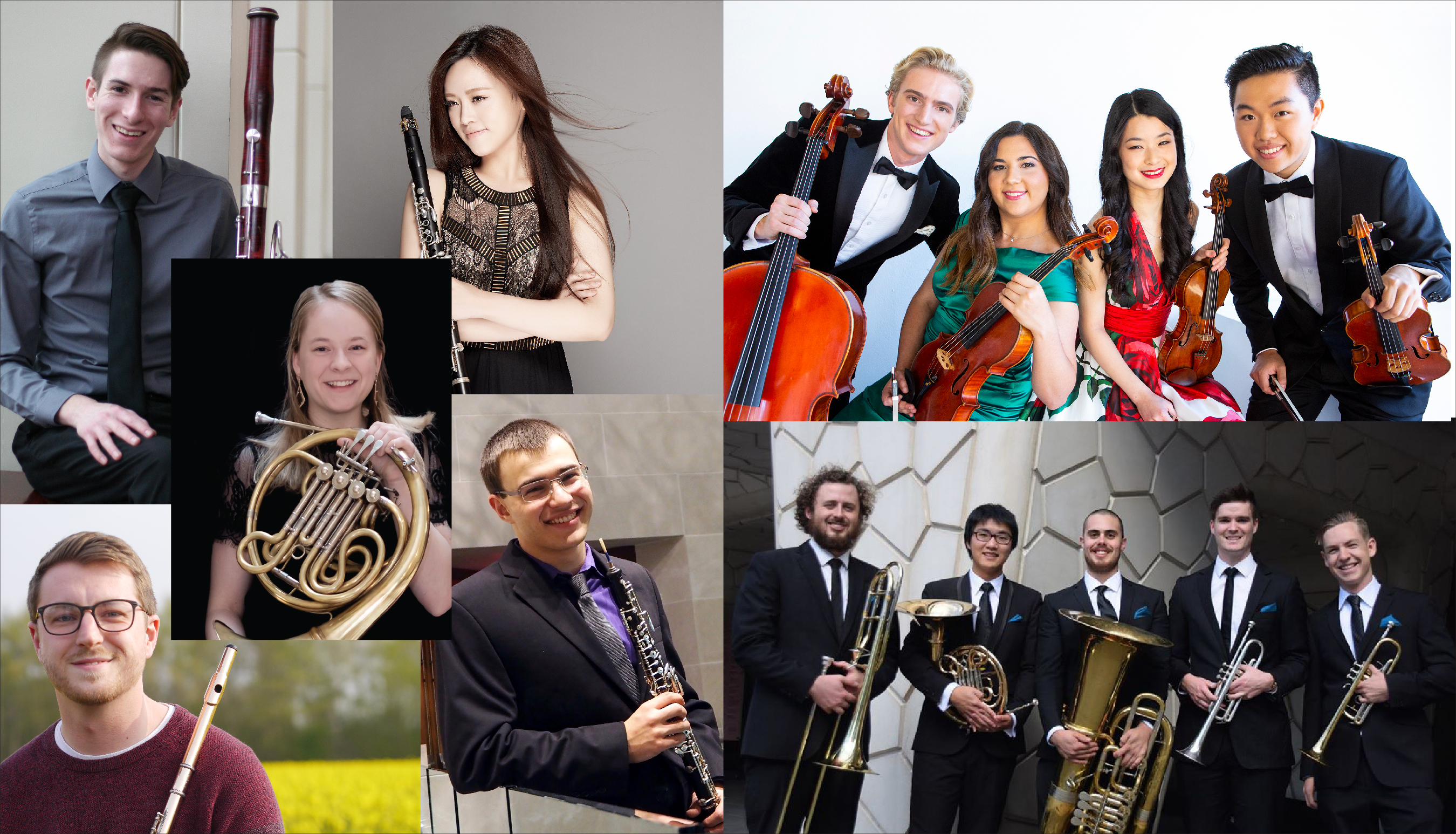 Join us online at 7 p.m. for a new performance beginning with an introductory conversation with Festival Director Melvin Chen and the evening's artists.

Formed in Melbourne in 2015, the MAVERICK BRASS QUINTET (NCMF '17, '18) is dedicated to the cultivation of engaging experiences with established and new brass repertoire. An award-winning ensemble — Oscar Mason and Connor Jenkinson, trumpet; Isaac Shieh, horn; David Farrell, trombone; Alex Jeantou, tuba — they were the 3rd Prize Winner at 14th Jeju International Brass Competition, 2016 winner of the Melbourne Conservatorium of Music Chamber Competition, as well as the inaugural winner of the Athenaeum Club Instrumental Ensemble Prize, becoming the first brass performance in the club’s 148-year history. The Maverick Brass Quintet has been Norfolk Chamber Music Festival’s brass quintet for the summer of 2017 and 2018, and is incredibly excited to be involved in making music amongst friends once more.

Unlike most groups, the Mavericks face the unique circumstance of having its members spread out across three different continents and five different cities. Despite this challenge, the group manages to seasonally meet in Melbourne to continue our collective musical ventures. The respective experiences of our five members, in five unique locations, makes for a vibrant coming together of musical ideas and voices. | artist facebook

A recent graduate of the Yale School of Music, trumpeter OSCAR MASON now resides in Boca Raton Florida. Freelancing with the Florida Grand Opera and Palm Beach Symphony has afforded Mason a wonderful immersion into Latinx-influenced Operatic world, an experience he has thrived on. Prior to moving to Florida, Mason appeared as a guest musician with the Melbourne Symphony Orchestra and Melbourne Baroque Orchestra, along with guest soloist performances with the American Baroque Orchestra.

A Master of Music candidate at Yale School of Music, CONNOR JENKINSON has the great opportunity to work with one of America’s top trumpeters, Kevin Cobb. Jenkinson has performed in the United States, Australia, and Asia both in chamber and orchestral settings. Prior to his studies in the US, he received a Bachelor of Music from the University of Melbourne studying with Dr. Joel Brennan and Rosie Turner.

Hornist ISAAC SHIEH has truly made the Europe his own, with an extensive list of performances across the vast continent. In 2018, Sheih was on trial with Paris-based contemporary ensemble Le Concert Impromptu, regarded by the Washington Post as ‘the finest French wind quintet’, before joining Haydn Philharmonie and Le Cercle de l’Harmonie. Now based in London, Isaac works regularly with Orchestra of the Age of Enlightenment, Chineke! Orchestra and Royal Academy of Music Baroque Soloists amongst others and has performed as a soloist at the British Horn Society Festival Gala Concert and in front of HRH Prince of Wales and Duchess of Cornwall at Llwynywermod.

Based in New York City, Trombonist DAVID FARRELL enjoys a global career of orchestral, chamber music, and solo playing. Farrell has recently completed a Master of Music at the Manhattan School of Music under the tutelage of Colin Williams. Living the dream on the upper west side, he performs as a member of the Claremont Trombone Quartet, three-time winners of the Fuchs Chamber Music Competition. Farrell's performance commitments have taken him across the US, Europe, Asia and Australia. Prior to his time in America, he studied under Don Immel and Mike Szabo and the Melbourne Conservatorium of Music, twice competing as a finalist in the Conservatorium concerto competition.

Currently based in Melbourne, Australia, ALEXANDER JEANTOU began his musical journey in the Victorian coastal town of Geelong. From the age of 12, successful youth competitions paved the way for Jeantou to become one of the emerging tuba players in the southern hemisphere. His performance commitments include appearances with the Victorian Opera, Orchestra Victoria, Melbourne Symphony Orchestra, Auckland Philharmonia Orchestra and the New Zealand Symphony Orchestra. Jeantou has recently received a Bachelor of Music at the Melbourne Conservatorium of Music under the tutelage of Timothy Buzbee. Affectionately known as A.J, the tuba star has travelled and performed across the United States and Asia with both the Australian Tuba Quartet and his beloved Maverick Brass Quintet. 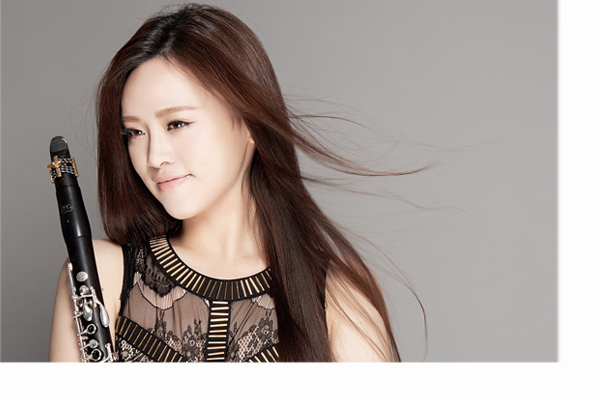 YU-TING CHENG (NCMF ’19)  is an award-winning Taiwanese clarinetist and composer. She has garnered numerous top prizes in her younger career, including successes at the 2003 national music competition Hsing-Tien Kong Young Artist Award, and winning the 2019 Stony Brook Concerto Competition and 2020 32nd CHIMEI Arts Award. Cheng is the recipient of 2015 Valeri Canady Foundation Scholarship in clarinet performance, 2017 Outstanding Alumni Award of the Taiwan Chapter of the Society of Peabody Alumni, and has received fellowships to the 2019 Norfolk New Music Workshop and 2020 LUCERNE Festival Academy. Cheng is the artist-in-residence of the 2020 “Stars of Tiding” O-Bank Education Foundation, and will be giving her solo recital in Taiwan this September. | artist website 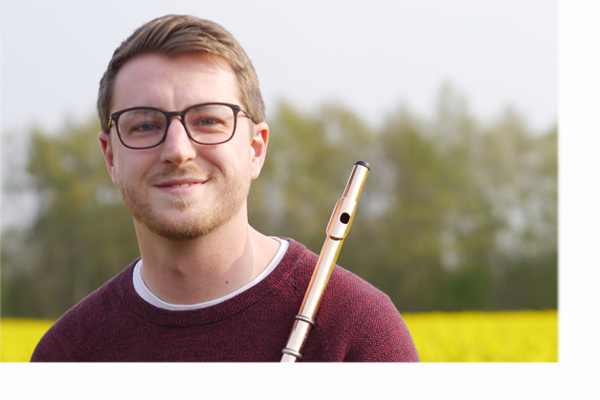 Growing up in the Lake District, England, CAMERON CULLEN (NCMF ’20) discovered his love for the flute at an early age. After competing with success at small local competitions and performing at the BBC Proms with the National Youth Wind Orchestra, he decided to pursue further conservatoire education. His four years at the Royal Welsh College of Music and Drama were formative, deepening his love of contemporary music and broadening his musical palette. After two years spent coaching talented music specialists at the prestigious Wells Cathedral School, he joined the Yale School of Music for his Master of Music degree, which he is halfway through. Cameron is thrilled to be invited to attend the Norfolk Chamber Music Festival this year, and is excited to continue making music with friends and colleagues. 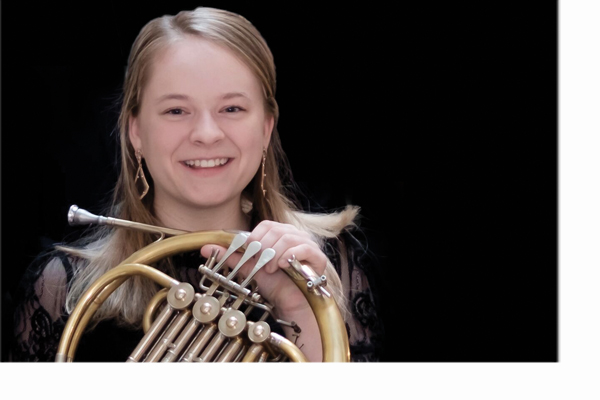 JORDAN DINKINS (NCMF ’19), horn, is pursuing a master’s degree at Northwestern University where she studies with renowned pedagogue Gail Williams. Dinkins graduated from the Peabody Institute of the Johns Hopkins University in 2019, where she studied under Denise Tryon and held the Mary C. Walker Scholarship and the Hackerman Family Endowed Scholarship. Dinkin’s awards include Yamaha Young Performing Artist, International Horn Symposium Soloist Competition, and the Grace Clagett Memorial Prize in Chamber Music from the Peabody Institute. She spent last summer at the Norfolk Chamber Music Festival where she performed alongside and studied with Ani Kavafian, William Purvis, Stephen Taylor, James Austin Smith, and Frank Morelli. Dinkins is an associate member of the Civic Orchestra of Chicago. 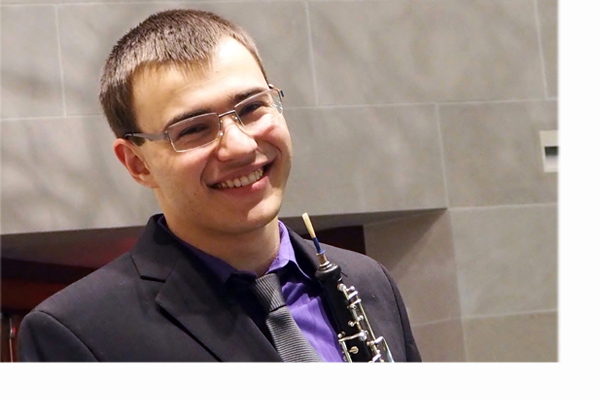 ELLIOT LICHTENBERG (NCMF ’18)  recently began work as a freelance musician and private instructor in the Dallas/Fort-Worth area. He earned his Master of Music degree from the Yale School of Music in 2019 as a student of Stephen Taylor and is an alumnus of the 2018 Norfolk Chamber Music Festival. Previously, he received his bachelor’s degree from the Eastman School of Music as a student of Richard Killmer. Over the past few years, Elliot also performed as a member of the National Repertory Orchestra and Round Top Festival Institute. In his spare time, he enjoys arranging music for chamber ensemble, folding origami, and foraging for wild plants. 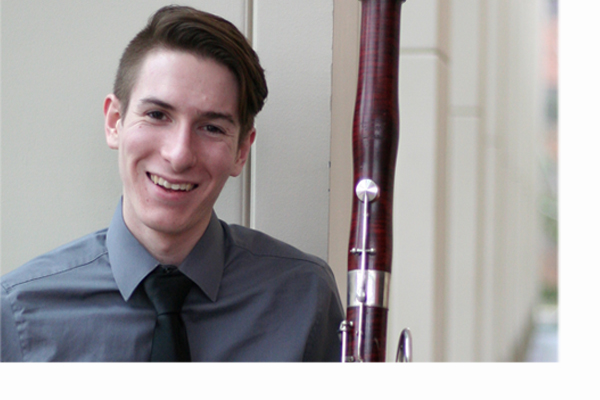 Bassoonist ANDREW SLEDGE  (NCMF ’19) enjoys a freelance career in and around southern Connecticut. An alumnus of the Norfolk Chamber Music Festival and New Music Workshop, his playing has been featured on Nashville Public Radio’s Live from Studio C,as well as the soundtrack to critically acclaimed video game Destiny 2. In addition to his work as a performer, he teaches a wide range of students through Yale Bands and Music in Schools Initiative. Andrew holds a Bachelor of Music from Vanderbilt University and a Master of Music from Yale School of Music, where he will return for his doctorate. His primary teachers include Frank Morelli and Peter Kolkay. | artist youtube

Praised for their “huge range of dynamics, massive sound and spontaneity” (American Record Guide), the VIANO STRING QUARTET (NCMF '18, '19) won First Prize at the 2019 Banff International String Quartet Competition and top prizes at the Osaka and Wigmore Hall International Chamber Music Competitions, where they also received the Haydn Prize and Sidney Griller Award. Formed in 2015 at the Colburn Conservatory of Music in Los Angeles, where they are Ensemble in Residence through the 2020-21 season, the quartet has performed in venues such as Wigmore Hall, Segerstrom Center for the Arts, SOKA Performing Arts Center, and the Cerritos Center for Performing Arts. The Viano String Quartet has performed with world class musicians such as pianists Emanuel Ax and Elisso Virsaladze, violist Paul Coletti, and violinist Martin Beaver. During the 2019-20 season, the Viano performs on three continents, making debuts in Beijing, Berlin, Brussels, New York City and Vancouver. The name “Viano” was created to describe the four individual instruments in a string quartet interacting as one. Each of the four instruments begins with the letter “v”, and like a piano, all the strings working together as a string quartet, play both harmony and melody, creating a unified instrument, called the “Viano”. | artist website