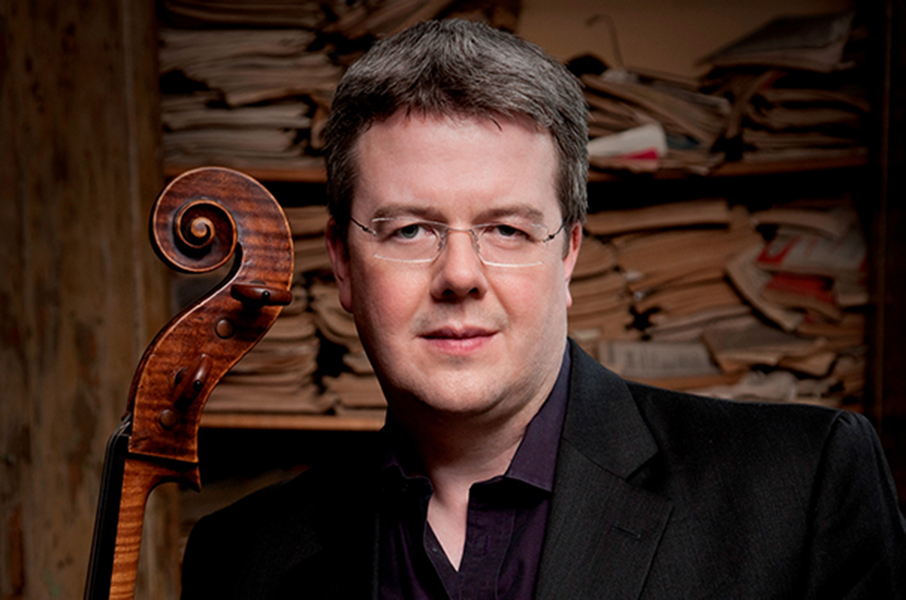 In his eighth year of playing with the Emerson String Quartet, cellist Paul Watkins is still the new kid on the musical block. That’s because he joined the founding members—violinists Eugene Drucker and Philip Setzer and violist Lawrence Dutton—in 2013, almost 40 years after the group was formed.

The courtship and then transition, Watkins says, went remarkably smoothly. Watkins did know a couple of the members and had played with them a couple of times. Cellist David Finkel, whom he was replacing, “had gotten to know me through the grapevine,” he says. “Gene was the only one I hadn’t played with yet.”

“We got along well musically and personally. It’s a bit like being in love really,” Watkins continues. “It needs to be love at first sight and it was. There needed to be some kind of spark of real joy in playing together. If it felt only 90% okay, I wouldn’t have gone.”

Prior to joining the Emerson, Watkins lived in London, playing with the Nash Ensemble, performing as a soloist and conducting orchestras around the world. Joining the acclaimed quartet meant uprooting his family to move to the United States. But while the transition has been generally smooth, “it was and still can be occasionally a delicate matter and balance,” Watkins says. “We have a very lucky combination of me having admired their work for a long time but also having enough confidence and experience before joining to know I could bring something to them.”

The founding members’ openness to new ideas has been important as well. “It’s to their credit to know not only what they’ve learned over 30 years but also to be open to new ideas coming from me, to be humble enough to know there are other ways of doing things,” he says, adding that a good sense of humor helps too. “That’s very important.”

Watkins credits the quartet’s love of the music with its longevity—both with its membership and in the public view. “It sounds cliché, but they love the repertoire. It’s the strength of that string quartet repertoire that keeps them together through thick and thin,” he says. “What has kept the quartet in the public ear for so long is they really do try to get to the heart of the pieces they’re playing every single time. They don’t let their personalities get in the way. It’s a questing that keeps going on every time we play. Every time we get together, we discover something new about these amazing pieces.”

Playing in a quartet is something Watkins says he’s wanted to do ever since he was a teenager. As a teen in the southern Wales, he loved to play with his father and his amateur musician friends. Attending the Yehudi Menuhin School in England solidified his love of chamber music. “It’s when I fell in love with string quartets.”

Watkins grew up in a house filled with music. His father was an amateur violist while his mother, a school teacher, loved to sing. “Dad wanted me to learn violin so he could have more of a regular string quartet,” Watkins says.

It was not to be. “I found the cellist of his friends so cool,” Watkins says, saying he wore a leather jacket and sometimes smoked while he played. “He looked like a British version of someone who might have stepped off the set of Starsky and Hutch.”

The sound of the cello lured him in, too. “I remember sitting cross-legged under the dining room table and being captivated by the vibrations of this instrument. It was so expressive,” he says. “I’ll never forget the sound of the C string with the cello.”

Watkins is a regular guest artist at the Chamber Music Society of Lincoln Center and Music@Menlo, and in 2014 he was appointed artistic director of the Great Lakes Chamber Music Festival in Detroit. Watkins also maintains a conducting career and, since winning the 2002 Leeds Conducting Competition, has conducted all the major British orchestras. He also has conducted the Royal Flemish Philharmonic, Vienna Chamber Orchestra, Prague Symphony, Ensemble Orchestral de Paris, Tampere Philharmonic, Netherlands Radio Chamber Philharmonic and the Melbourne Symphony, Queensland and Tokyo Metropolitan Symphony Orchestras. Watkins is also part of the cello faculty at the Yale School of Music.