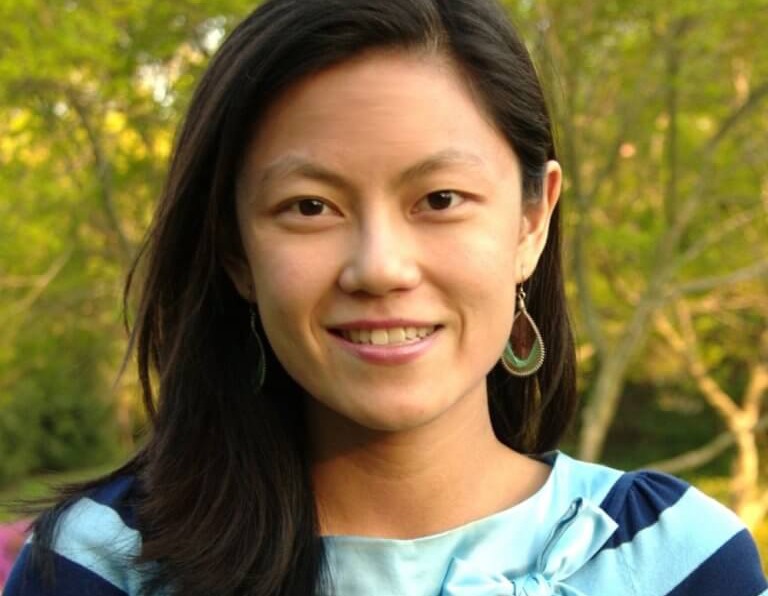 Composer Angel Lam, the Festival’s second commissioned composer of the Musical Bridges project, often starts considering a composition not with specific musical sounds but with words or a story. She gives an example of something she wrote while composing a piece for solo guitar called little snow:

“My daughter was born on the eleventh day of the eleventh month of the lunisolar calendar, the day of “little snow” — the first snowfall that marks the beginning of winter. Last January in the middle of winter, my father departed the world suddenly, and unexpectedly. They missed meeting each other in this world during the pandemic year.

“Years ago, when I was much younger, my father told me a dream he had of a little girl who looked like a snow fairy, with plump white cheeks and a round body, who had walked through a light, snowy landscape … to come visit me! My father heard the sound of a plucked instrument, which he could not forget … a song about life, of joys and sorrows.

(Scroll down to view a video of little snow performed by Ukrainian guitarist Marko Topchii.)

It was the sound of the pipa that inspired Lam’s direction in her Musical Bridges commission to be performed in a free concert July 6 with GRAMMY-award winning pipa soloist Wu Man.  The pipa, a lute-like Chinese instrument, has a history that is more than 2,000 years old. “I chose this instrument because to me the pipa sounds like water,” Lam shares, noting that the working title of her piece is The Heart as Deep as the Ocean. “It’s very nature-like. It connects with something real but it can also depict something bigger emotionally, like a battlefield. And through the sound of the battle it can depict the emotion of the warrior in battle.”

The piece, which was still being finalized when we talk, concludes, Lam says, with the warrior surrounded by enemies. “He is with his love and they both die,” she says. “I wanted to depict something about deeply felt emotions.”

Lam says she has always been strongly aware of emotional energy. “I felt this most strongly as a child,” she says. “As a child I could feel other people’s emotional energy very strongly.” She tells the story of traveling in China and getting off the tour bus at a historic site. It was snowing slightly and an old man was sitting near the bus stop, hoping to sell maps to arriving tourists. “I felt very touched,” she says, noting she bought some of his maps. “I couldn’t stop crying that night. I was so touched by that incident.”

Interest in emotional connection drives her music in general and this new work in particular, Lam says. “All of my music is connected to something that’s deeply felt. Hence the title. There are many shades of emotions that the heart knows, and I’m exploring that in my music. The heart knows a lot of things we just don’t remember.”

Lam says her father’s death a year ago has only made her more connected to and interested in exploring spirituality. His passing, she says, is not the beginning or the end of her relationship with him. “I came to an understanding that there is more of our relationship before and after [his death].”

"We have experiences of every human life but we don’t have to remember all the details,” she says. “Like when I saw the old man and bought his maps. I could feel his emotional energy so strongly. My heart knows it even though I can’t say it. [My music] is an exploration of what is life and the search for the meaning of life. I can’t explain it but I guess I’ll write it in music.”

Although Lam focused on dancing in her early artistic life, she says she started writing melodies at a young age, often writing compositions that she could dance to. In high school she realized that a dancer doesn’t necessarily have a long career due to the physical toll dancing can take but that a composer can work into old age. So she turned to music and composing.

At this point, Lam has written for orchestras as well as for dance and film and chamber groups.

Regardless of the scope and instrumentation of a work, they are all somehow about our humanity. “I want to connect with the human experience,'' Lam says, launching into a story about her grandmother’s death when she was 4 or 5. “I thought I met her on the day she died. She picked me up from school. I saw her but she didn’t arrive. I created a piece around that. I saw her approaching school but the teacher said she wasn’t coming.” When Lam arrived home, relatives were gathered because her grandmother had had a heart attack and was in the hospital. “I said, ‘No, I saw her.’ Her routine was she was supposed to pick me up and she can’t miss that. I wrote a piece about this called Empty Mountain Spirit Rain.”

Exploring a potential musical work by writing first gives Lam “the atmosphere to enter into. I need my music to have a stage. I need to create a state for people to enter into. A mood. An emotional thing. I step into and enter this vibration of emotional connection. I need to set the stage of experiencing … whatever.”

Join us at 7:30 p.m. on July 6 for the premier concert of Angel Lam's The heart is deeper than the ocean. The concert and discussion are free and open to the public.

Musical Bridges is a multiyear project in which the Norfolk Chamber Music Festival commissions new works that place classical chamber music within a broader musical and cultural context. Musical Bridges is made possible through the generous support of the Desai Family Foundation.