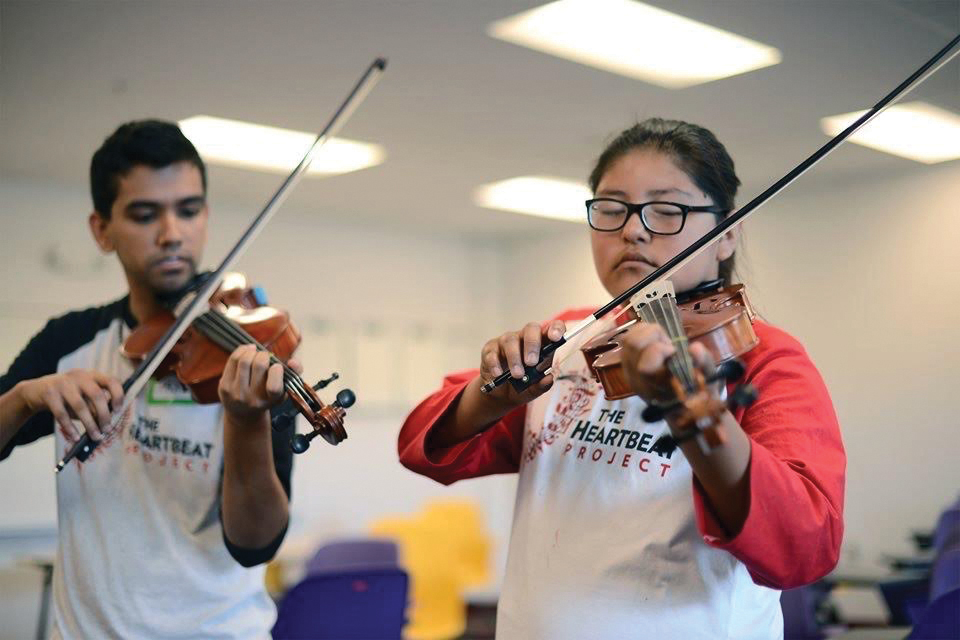 The Heartbeat Music Project, an organization that was created in 2016 by violinist and YSM alum Ariel Horowitz ’19MM ’20MMA to provide free music and cross-cultural education to Diné youth on the Navajo Reservation in Crownpoint, New Mexico, has received a $500,000 Accelerator Award from The Lewis Prize for Music. The award was established to “provide multi-year support to enable leaders and organizations to make sustained progress toward ambitious community change initiatives,” The Lewis Prize explained today in a press release.

“We, until this point, have been a completely grassroots organization,” Horowitz, the organization’s artistic director, said. “We have been sustained by very regular people who love our kids. At the very outset, it was a volunteer effort. I am so proud of what we have done with so little these past five years. There is so much that’s possible now.” Horowitz described receiving The Lewis Prize’s Accelerator Award as a “completely life-changing” moment for the Heartbeat Music Project, its students, and the community.

One of those young musicians, a 12-year-old violinist named Aspyn who’s been a Heartbeat Music Project student since 2017, said working with Horowitz and the organization’s teachers and staff “has opened up a whole career path for me. I want to end up doing this as a career, not just a hobby.”

The Lewis Prize press release explains that “teachings at The Heartbeat Music Project push back on settler colonialism, a system that devalues Indigenous music while elevating Western music genres. By offering Diné and Western music simultaneously, Heartbeat disrupts the colonial project and provides Diné youth equitable access to heretofore ‘elitist’ knowledge. Students engage in an organic confidence-building process in which they strengthen and give voice to their own culture and reimagine Western music genres, creating emergent artistic traditions that help shape postcolonial local and global musical cultures and are sustained within the greater Navajo community.”

“That in itself is almost a revolutionary act,” The Lewis Prize’s CEO, Dalouge Smith, said, agreeing that young people on the Navajo Reservation “need to know their culture in relationship to the Western culture that surrounds them.” The Lewis Prize, established by its namesake, philanthropist Daniel R. Lewis, “believes that music in the lives of young people is a catalytic force to drive positive change in our society,” that organization’s press release said.

“What we saw was the creative youth-development sector stepping up, taking on work that had never been their work before,” Smith said. In the case of the Heartbeat Music Project, that work has intensified.

“We connect as many students as we can to music, free of cost,” Lewis said. That includes providing students with instruments and transportation, and connecting them to teachers outside of the reservation. Those lessons, too, are paid for by the Heartbeat Music Project.

Many Diné youth “haven't seen Western instruments before,” Horowitz said in 2019, upon receiving the Yale-Jefferson Award for Public Service for her work with the HMP. “Their lived experience is so drastically different from mine.” The Diné people, Horowitz said, face “massive systemic inequity” and “intergenerational trauma.”

The Yale-Jefferson Award recognizes “sustained public service that is individual, innovative, impactful, and inspiring" and individuals who "demonstrate service that draws on the Yale community and/or resources to benefit the world beyond Yale.” A number of Yale School of Music students and alumni have been involved with the Heartbeat Music Project.

Recipients of this year’s Accelerator Awards, which include We Are Culture Creators (Detroit, Mich.), RYSE Youth Center (Richmond, Calif.), and INTEMPO (Stamford, Conn.), “are creating spaces for young people to develop artistry and leadership that strengthens themselves and their communities,” Smith said in The Lewis Prize’s press release. “Our awardees show us that building trusted relationships through music with young people gives them the confidence and tools to pursue the full lives they deserve.”

Teachers and friends like Horowitz and Lewis have inspired Aspyn. “I see things in them that I want in my future,” she said.

Read more about the Heartbeat Music Project here and The Lewis Prize for Music here.