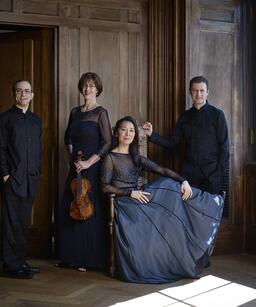 Such was their ferocity on Saturday night that the instruments almost burst into flames…Make no mistake: the Brentanos are a magnificent quartet… — The Times (London)

Such was their ferocity on Saturday night that the instruments almost burst into flames…Make no mistake: the Brentanos are a magnificent quartet… — The Times (London)

Since its inception in 1992, the Brentano String Quartet has appeared throughout the world to popular and critical acclaim. Within a few years of its formation, the Quartet garnered the first Cleveland Quartet Award and the Naumburg Chamber Music Award, and in 1996 the Chamber Music Society of Lincoln Center invited them to be the inaugural members of Chamber Music Society Two, a program which was to become a coveted distinction for chamber groups and individuals.

In recent seasons the Quartet has traveled widely appearing all over the world and had performed in some of the world’s most prestigious venues. The Quartet has participated in summer festivals such as Aspen, the Edinburgh Festival, and the Kuhmo Festival in Finland, and the Norfolk Chamber Music Festival–Yale Summer School of Music, among many others.

The Brentano Quartet has a strong interest in both very old and very new music. It has performed many musical works pre-dating the string quartet, among them works of Gesualdo and Josquin, and has worked closely with some of the most important composers of our time including Elliott Carter and Steven Mackey. The Quartet has released numerous recordings and can be heard in the 2012 film A Late Quartet.

In 2014, the Brentano Quartet became the Quartet in Residence at the Yale School of Music, departing from their 15-year residency at Princeton University. The Quartet is named for Antonie Brentano, whom many scholars consider to be Beethoven’s “Immortal Beloved.”