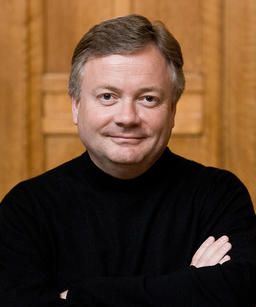 David Hill has had a long and distinguished career as one of the leading conductors in Europe. Currently, he is the Chief Conductor of the BBC Singers, Music Director of the Bach Choir, Chief Conductor of the Southern Sinfonia, Music Director of the Leeds Philharmonic Society, and Associate Guest Conductor of the Bournemouth Symphony Orchestra. With more than 70 recordings to his credit, Hill has performed choral repertoire in virtually every style and from every period—from Gregorian chant to Renaissance polyphony and from Baroque oratorios to modern masterpieces for chorus and orchestra. He has also commissioned dozens of works from the today’s leading composers.

At the Yale Institute of Sacred Music, Hill conducts the Yale Schola Cantorum, with whom he has made several recordings. The ensemble’s latest release on Hyperion Records, featuring Iain Farrington’s chamber-ensemble arrangement of Brahms’ Ein deutsches Requiem garnered enthusiastic reviews.