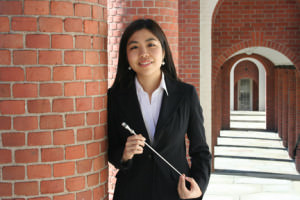 This is the third consecutive win for Yale students at these conventions, which occur every other year: Soo-yeon Lee won the competition at the last National Convention in Miami 2007, and Kimberly Dunn gained second prize in Los Angeles in 2005.

Beverly Shangkuan is a first year MM choral conducting student at the Yale School of Music and the Yale Institute of Sacred Music, where she studies with Simon Carrington, Marguerite Brooks, and Jeffrey Douma. At Yale, she is co-director of the Marquand Chapel Choir and the Yale Repertory Chorus. She is also an assistant conductor of the Yale Camerata and the University Chapel Choir. Beverly received a Bachelor of Music in Choral Conducting summa cum laude from the University of the Philippines in 2006. As college valedictorian, she was the recipient of the Dean’s Medal for Highest Scholastic Achievement. From 2006-2008, she was instructor of music in the University of the Philippines, where she taught undergraduate music theory and score reading. She also served as conductor for various community, school, church, and children's choirs in Manila.