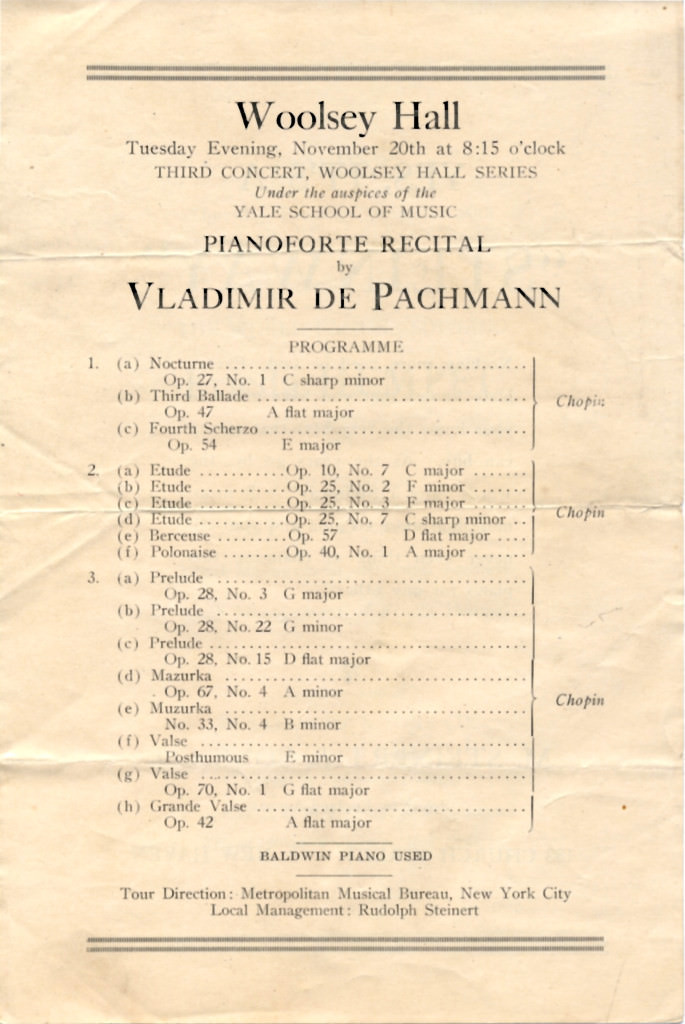 The Ukrainian pianist Vladimir de Pachmann, born in 1848 to an Austrian violinist father and a Turkish mother, performed an all-Chopin program at the Yale School of Music on its Woolsey Hall Series. The program does not list the year of the recital, but it would have taken place by 1925, the last time he performed in New York before retiring to Italy.

Pachmann earned renown for his playing  and ridicule for his peculiar stage antics. He spoke before and sometimes during his performances, prompting the nickname "Chopinzee." But his performances of Chopin's music earned particular admiration. The composer and critic Kaikhosru Shapurji Sorabji was enraptured:

The almost unlimited range of his gradations of tone within a mezzo forte and an unbelievable quasi niente, the amazing fluidity and limpid liquidity of his fingerwork, his delicious dainty staccato, the marvellous cantilena, the exquisite phrasing and the wonderful delicate fantasy of the whole, all made his playing [of the smaller works of Chopin] an enchantment and a delight.

The New York Times archives include a review of Pachmann's first recital in New York, given in 1904. Mark Mitchell has written a book on Pachmann, published by Indiana University Press. Allan Evans offers three essays on Pachmann's recordings; the pianist was one of the first musicians to record extensively.

A note on the program states that Pachmann played a Baldwin piano, but the inside front cover is a full-page ad for Steinway instruments by the company's sole New England agents.