Ji Hye Jung '09 MM, a student in percussion, has recently been appointed to the faculty at the University of Kansas, where she will teach percussion.

In addition, violinist Sun-Mi Chang '08 AD has won a position with the St. Paul Chamber Orchestra. 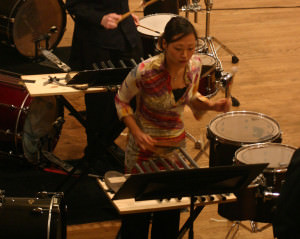 Korean percussionist Ji Hye Jung burst into the spotlight during the 2006-2007 season with consecutive First Prizes at the 2006 Linz International Marimba Competition and the 2007 Yale Gordon Concerto Competition in Baltimore.  At twenty-five years old she is already sought after around the world as a soloist and teacher of marimba, percussion, and chamber music.

Ji Hye frequently works with many of the top artists in the field – performing as a soloist with renowned conductors including David Robertson and Hans Graff and commissioning composers Alejandro Viñao, Paul Lansky, and Lukas Ligeti.  Recently, she has presented solo recitals and master classes at the Schleswig-Holstein Festival in Germany, the Grachtenfestival in Holland, the Seoul Arts Center in Korea, the Beijing Central Conservatory in China, and universities throughout the United States. She currently serves on the faculty of Cleveland State University and has also taught at the Peabody Preparatory in Baltimore and the International Katarzyna Mycka Marimba Academy in Poland. Ji Hye is endorsed by Vic Firth sticks and mallets, Pearl Drums, and Adams Percussion Instruments.

As a student of Robert van Sice, Ji Hye received a Bachelor’s degree from the Peabody Conservatory in Baltimore and is currently completing a Master of Music degree from the Yale School of Music.  She has attended many of the world’s top festivals and worked with conductors Christoph Eschenbach, Leonard Slatkin, and James Conlon as well as composers Martin Bresnick and Ezra Laderman. 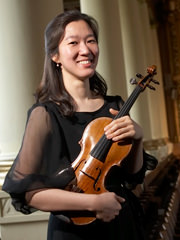 Sun-Mi Chang began her study of the violin at the age of seven with Prof. Nam-Yun Kim in her native South Korea. Before going to England to study at the Yehudi Menuhin School (YMS) in 1995, she had already won several national competitions such as the Wol-Gan Music Competition, the 20th Junior Korean Newspaper Competition, and the Cho-Sun Daily Newspaper Competition. While at the YMS, she performed regularly in concerts in various concert halls including Wigmore Hall, Queen Elizabeth Hall, Royal Albert Hall, and Purcell Room. In 1998 and 1999 she toured with the YMS orchestra performing Bach’s Concerto for Two Violins, conducted by Lord Menuhin, in UNESCO Headquarters in Paris, Guilford Cathedral, and other prominent venues.

After graduating from the YMS she went to Germany to continue her studies at the Hanns Eisler Musikhochschule in Berlin with Professor Eberhard Feltz. Sun-Mi Chang has taken part in various master classes and summer festivals with Mauricio Fuks, Maya Glezarova, Felix Andrievsky, Zakhar Bron, Robert Masters, Zvi Zeitlin, Rainer Kussmaul, Boris Kuschnir, Igor Ozim, Midori, and Lord Menuhin. In 2006 she won the Woolsey Hall Concerto Competition at the Yale School of Music, and she has performed the Bartok Violin Concerto No. 2 with the Philharmonia Orchestra of Yale. She earned her Artist Diploma degree from Yale under Peter Oundjian.

Chang has taken part in the Caramoor Rising Stars Series in 2006 and 2007 and has performed with renowned artists such as Kim Kashkashian, Donald Weilerstein, Ani Kavafian, Marcy Rosen, and Edward Arron. She is also the laureate of the 2007 International Markneukirchen Violin Competition in Germany and the 2007 International Sion Valais Violin Competition in Switzerland.