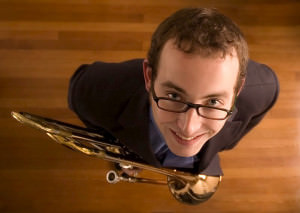 John Sipher ’08MM has been appointed principal trombone of the Syracuse Symphony Orchestra. He will begin performing with the orchestra of its summer season and will begin full time in September.

John Sipher is a freelance trombonist currently residing in Miami Beach, Fla.  A musician with a diverse musical background, John performs orchestral, chamber, jazz and commercial music.  A proponent of new music, he commissioned pieces for a recital in December of 2007 from composers Jay Wadley, Daniel Louis Vezza, and Matthew Johnson.  John is also an accomplished teacher with a degree in music education and is available for private lessons and masterclasses.   John currently performs as a fellow in the New World Symphony in Miami Beach.  In March 2009, John was appointed to the Syracuse Symphony Orchestra as their new principal trombonist.