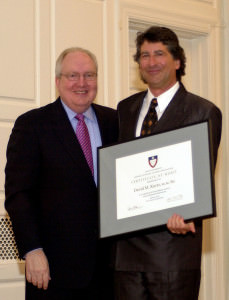 David Kurtz ’80MM, a composer and lyricist, has been nominated for three Emmy Awards.

One nomination is for Outstanding Achievement In Music Direction And Composition For A Drama Series; Kurtz, along with fellow composer Jack Allocco and music supervisors Mike Dobson and Bryan Harrison, was nominated for his work on The Young and the Restless. Kurtz also received two nominations in the category of Outstanding Original Song for a Drama Series: one for "All My Days Filled with You" and the other for "For All Time," both co-written with Jack Allocco.

In addition to his work on The Young and the Restless, Kurtz has contributed to the music for The Bold and the Beautiful, By the Sea, Alien Nation, Charles in Charge, and many other television productions, as well as movies including The Big Chill, Instant Justice, and Hunk. Kurtz is also a member of the Yale School of Music Board of Visitors.