The 2009 Norfolk Chamber Music Festival is underway, offering concerts on Friday and Saturday evenings as well as free lectures, fellows' performances, and a listening club.

This Norfolk season announcement from the archives does not list a year; many of the participating musicians were on the faculty from the 1930s onward. The concerts all take place Fridays at 3:00 pm in Battell House, indicating a more informal series than what the season might have offered in the Music Shed on weekend evenings. 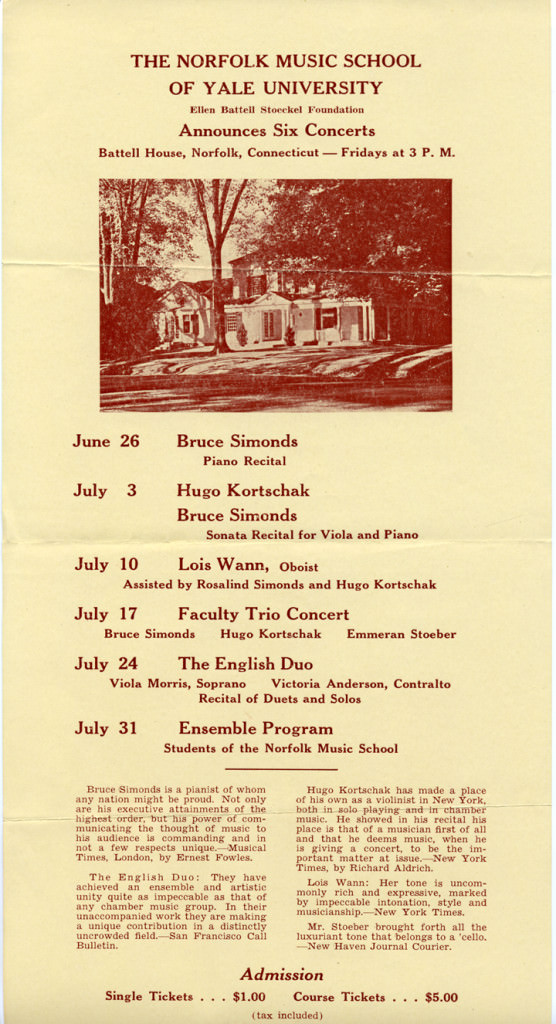 Bruce Simonds, a pianist who appeared in two programs that summer, joined the faculty in 1921 and taught until 1964, serving as Dean from 1941 to 1954. Other programs in Yale's archive indicate that he often performed two-piano repertoire with his wife, Rosalind Simonds. A photo from the library's archives shows Simonds participating in a folk dance at Norfolk, a tradition that has since died out.

Several of the other performers also have a history with Yale: Hugo Kortschak was a violinist, violist, and conductor who was Assistant Professor of Violin Playing 1929-1952. Images from Yale University library archives show Kortschak in the Battell House dining room at Norfolk. Kortschak and faculty cellist Emmeran Stoeber played together in the short-lived Berkshire Quartet, established by Elizabeth Sprague Coolidge in 1917.

Lois Wann, a faculty member at both Yale and Juilliard, was the first woman to serve as principal oboist of a major American symphony orchestra.

The members of the English Duo - soprano Viola Morris and contralto Victoria Anderson - were actually born in Australia but first sang together in London. Here is a 1947 article from the Australian newspaper The Age calling the duo "one of the best known and popular concert combinations in U.S.A."