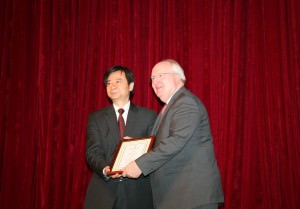 Last fall, the Central Conservatory of Music in Beijing, China honored Dean Robert Blocker at a ceremony celebrating the 70th anniversary of its founding. On November 1 the Conservatory held a ceremony with hundreds of alumni and guests, including composer Tan Dun, pianist Lang Lang, and the heads of numerous Chinese universities, conservatories, orchestras, and opera companies.

The Yale School of Music enjoys a close collaboration with the Central Conservatory (CCOM). Over the years, several students have come to Yale from CCOM, and in 2008, CCOM and the Yale School of Music jointly hosted Musicathlon: the Conservatory Music Festival, presenting performances and master classes with musicians from eleven conservatories across the globe. The Philharmonia Orchestra of Yale performed at Beijing's Forbidden City Concert Hall, and the ensemble joined with the CCOM orchestra and chorus in a performance of Mahler's Second Symphony.

In the November ceremony, Dean Robert Blocker was honored with a Certificate of Honorary Academician. The distinction was also given to Yu Long, the artistic director of the China Philharmonic Orchestra. Other awards included the Excellent Artistic Achievements Award, given to pianist Lang Lang.

The ceremony concluded with a performance of the fourth movement of Beethoven's Symphony No. 9, performed by the China Youth Symphony Orchestra of CCOM and Youth Chorus of CCOM. Lin Tao conducted. 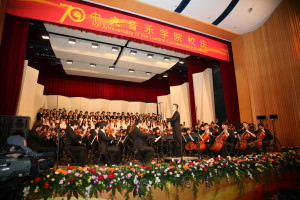