Bo Li '09MM has been appointed the principal viola of the Hong Kong Philharmonic Orchestra. He will begin work with the orchestra in August. At the Yale School of Music, Li studied with the late Jesse Levine. "He taught me a lot," Li said of Levine. "That I can get this position mostly comes from what I learned from him." 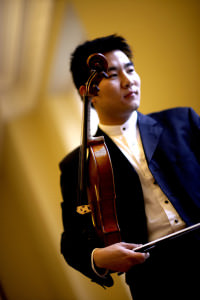 While still a student at Yale, Li was appointed principal viola of the Atlanta Opera for the 2009-2010 season. He graduated in 2007 from the Beijing Central Conservatory, where he studied with Wing Ho ’87MM, also a student of Levine.

Li is a frequent soloist with the EOS Orchestra under the baton of Yongyan Hu.  As a recitalist, he has made numerous appearances as a soloist in China, the US, Europe, Japan, Korea, and Canada. At age eighteen he toured throughout China, performing the complete Bach unaccompanied cello suites.  In 2005, he was invited twice by Tung Chee Hwa, the first elected Chief Executive of the Hong Kong Special Administrative Region of China, to give a private solo recital.

Also active as an orchestral and chamber musician, Li has appeared as the principal violist with orchestras under the baton of Valery Gergiev, Seiji Ozawa, David Zinman and Peter Oundjian. He has participated in festivals including the Aspen Music Festival, the PMF Festival (Japan), the Great Mountain Music Festival (Korea), and the Beethoven Music Festival (Germany). He has earned several awards, including the Mr. Ng Fung Chow Memorial Scholarship, the Tertis International Viola Competition (UK), and the China National Viola Competition. He is the winner of the 2007 Great Mountain Music Festival Concerto Competition, which resulted in a performance with the GMMFS Festival Orchestra under conductor Shinik Hahm.