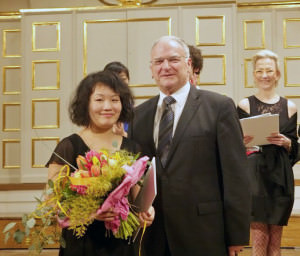 The competition takes place in Salzburg, Mozart’s birthplace, at the Universität Mozarteum. In its 10th edition this year, it focused on the repertoire for piano and violin. The orchestral rounds featured the Camerata Salzburg, and Dennis Russell Davis conducted the final round. Jury members this year included Robert Levin, Fou Tsong, Franghiz Ali-Zadeh, Jean-Bernard Pommeir, Pual Gulda, and Maria Tipo.

Xiaoxi Wu was born in 1983 in Beijing and began her study at the age of seven with Mingsun Zhou. In 2002, Xiaoxi was admitted to the Gnesins Academy of Music in Moscow, where she began to study with Alexey Skavronsky. She received her B.A. degree in 2006 and the M.M.A. degree in 2008. In 2004, she was awarded the Grand Prix at the Kiev International Music Competition, and in 2007 she was awarded a Diploma for Professional Mastery and Artistry from the Russian Composers Union. She also won third prize at the Fourth Europe-Asia International Piano Competition in memory of Stanislav Neuhaus, as well as an Honorable Diploma in the Thirteenth Piano Ccompetition in Andorra. Xiaoxi has performed in many concert halls in Moscow and has given regular recitals in the National Philharmonic Society of many cities in Russia.