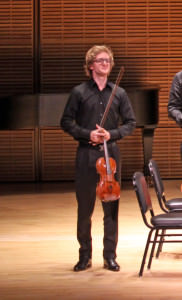 Marc Daniel van Biemen ’10CERT has just won a position as a first violinist in the Royal Concertgebouw Orchestra.

Said van Biemen, "I would like to give Yale much deserved credit for reaching this wonderful goal in my career."

At left is a picture of van Biemen at Zankel Hall at Carnegie Hall, where he performed on the Yale in New York series in February of 2010.

One of Holland's promising young concert artists, Marc Daniel van Biemen won second prize in the 22nd Oskar Back National Violin Competition, held in the Concertgebouw in Amsterdam. He has soloed with such orchestras as the Netherlands Symphony Orchestra, the Hague Youth Orchestra, and the Royal Conservatory Orchestra of the Hague, among others.

As an active orchestral musician, he has served as concertmaster and assistant concertmaster of, among others, the Philharmonic Orchestra of the Americas, Yale Philharmonia, Aspen Festival Orchestra, and Duquesne University Symphony Orchestra. He has worked with conductors such as Jaap van Zweden, Reinbert de Leeuw, Marin Alsop, David Zinman, James Conlon, Alan Gilbert, Martin Sieghart, David Robertson and Leonard Slatkin.

He has attended festivals such as Meadowmount and Aspen, where he received an orchestral fellowship for 2008-2009 and studied with Herbert Greenberg. He has played in master classes and coachings by such eminent artists as Gil Shaham, Peter Oundjian, Ani Kavafian, the Tokyo Quartet, David Shifrin, and Trio con Brio Copenhagen.

Marc Daniel received his first musical lessons at the age of six from his father, Wybo van Biemen. At the age of nine he was admitted to the Royal Conservatory of The Hague, where he studied with Koosje van Haeringen. He then continued studying privately with Jaap van Zweden and Herman Krebbers. In 2005 he was invited by Sidney Harth to study at the Duquesne University Mary Pappert School of Music in Pittsburgh. In 2007 he was accepted at the Yale School of Music, where he studied with Syoko Aki. He plays on a Nicolò Amati violin, made in Cremona in 1675.