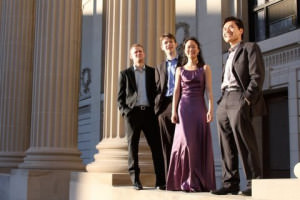 YSM alumni were among the winners of the recent Concert Artists Guild Victor Elmaleh Competition. The annual event is open to instrumentalists, singers and chamber ensembles performing classical and non-traditional repertoire.

Among this year's winners were the Amphion String Quartet and the string quintet Sybarite5, two ensembles whose members include YSM alumni. All winners receive a two-year management contract with with the Concert Artists Guild as well as a New York recital opportunity. Sybarite5 also won the Sylvia Ann Hewlett Adventurous Artist Prize.

The Amphion Quartet has been hailed for its “gripping intensity” and “suspenseful and virtuoso playing” by the San Francisco Classical Voice. Last year, the quartet won first prize in the piano and strings category as well as the Audience Choice Award at the Plowman Chamber Music Competition and first prize in the Hugo Kauder String Quartet Competition. Recently they have made appearances at the Beinecke Library at Yale University, the WMP Strad for Lunch Series in New York, as well as Yale University’s Sprague Hall. Highlights of the 2011–2012 season will include an appearance at the Schneider Concert Series in New York City, a world-premiere performance of a string quartet by John Sichel in New Jersey, and a performance at the Metropolitan Museum of Art.

SYBARITE5 has recently appeared at the Library of Congress, on the CBS Early show, for his Holiness the Dalai Lama, and numerous times at the Aspen Music Festival. In New York City they have performed at Lincoln Center, Time Warner Center, Galapagos ArtSpace, and many other venues, and they maintain a residency at the cell. SYBARITE5 was the first string quintet admitted to the Aspen Advanced Quartet Studies program; they continue their tenure at the Aspen Music Festival in a new capacity as the AMFS Alumni Ensemble. Ongoing programs include the Radiohead Remixed Project, the Shuffle Effect, New Music IDOL, an Alternative Venues Initiative, and the DIDO Project. In 2013 SYBARITE5 looks forward to premiering the world’s first concerto for string quintet and orchestra by Dan Visconti.