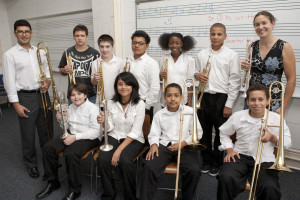 Dean Robert Blocker announced yesterday the appointment of Rubén Rodríguez as a full-time member of the YSM staff and the Lead Teacher in the Music in Schools Initiative.

The Music in Schools Initiative includes the School's year-round programs in the New Haven Public Schools, funded by the Class of 1957 Endowment, as well as the Morse Summer Music Academy, which has enjoyed two successful summers so far.

Rodríguez, who graduated with an M.M. degree in trombone from the School of Music in 2011, has been involved in the Music in Schools Initiative since he began working as a graduate teaching artist upon his arrival at Yale. This September, he took the position of part-time band teacher at John C. Daniels School through funding from the Class of 1957 Endowment.

Dean Blocker commented, "His full-time appointment at YSM is a logical continuation and extension of the work he has been doing in New Haven for the past several years."

In addition to his studies at Yale, Rubén studied trombone at the CNSMD in Lyon, France, the Conservatoire Supérieur de Paris, and at the Universidad Nacional de Colombia in Bogota. He has also taught trombone at a variety of universities in his native Colombia.

Rodríguez will continue to teach at John C. Daniels School. He will also administer YSM's graduate teaching artist programs at ten other New Haven Public Schools. Also in his portfolio will be administration of the City-Wide Honors Band and Chorus, the Yale/New Haven Young Artists Solo Competition, and the Morse Summer Music Academy.