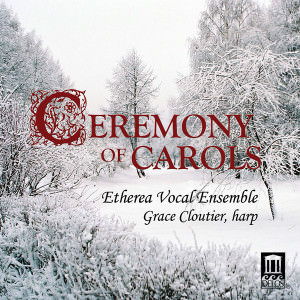 Grace Cloutier ’05MM and the vocal ensemble Etherea, which includes several Yalies, have seen their recent album rising on the charts. Ceremony of Carols, on Delos, became the No. 1 featured classical album on iTunes and debuted at No. 4 on the Billboard ‘traditional classical’ charts.

Opera News offered a rave review, saying that "The singers of Etherea impress the listener with their dynamic range and flexible technique" and "present an elegant, nuanced reading of Britten's score." In addition, "Cloutier provides superb accompaniment throughout, and in addition to the solo harp interludes in the Britten and Rutter, she excels in a lush, romantic performance of Gliere's Impromptu for Harp." 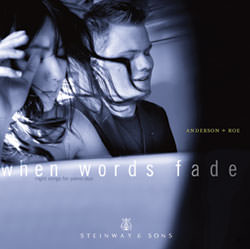 Greg Anderson ’08MMA, with his piano duo partner Elizabeth Joy Roe, released When Words Fade on the Steinway & Sons label. The debut release from Anderson & Roe is captured by multi–Grammy-winning producer Steven Epstein. When Words Fade features original piano four-hand arrangements of vocal repertoire and popular songs by composers from Vivaldi, Rachmaninov, and Schubert to Michael Jackson, Radiohead, and Coldplay. Packaged with the CD is a bonus DVD featuring dramatizations that re-interpret four of the wordless piano duos and their emotional potency with a modern twist. Watch their video of Schubert's Erlkönig HERE.

The Janus Trio, whose flutist is Amanda Baker '00MM, released an album earlier this year on the New Amsterdam Records label (run by Judd Greenstein '04MM). A review from Studio 360's David Krasnow said, "Janus Trio proves we're in the golden age of chamber music." i am not was one of Time Out Chicago's top ten albums to check out, one of NPR's top ten albums to buy in the 12th Annual Director's Cuts Gift Guide by Ned Wharton, and a Time Out NY pick of the week for their album release at Joe's Pub. The album includes music by Jason Treuting '02AD.

Davis Brooks ’77MM, a professor of violin at Butler University, has released two solo CDs in the past year. Music and Electronics contains seven pieces for violin and tape by seven American composers and was positively reviewed in Strad magazine. In March, Davis released The Violin Music of C. P. First. In addition to his teaching duties, he is associate concertmaster of the Indianapolis Chamber Orchestra and maintains an active commercial recording schedule.

Alumni: send in your news to musicnews@yale.edu.