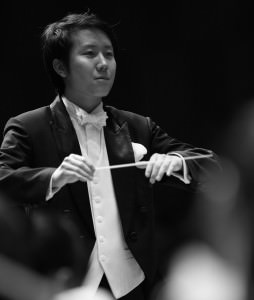 The Li Delun National Conducting Competition was organized by the Ministry of Culture, the China Symphony Development Foundation, and the local government of Qingdao. As Gramophone Magazine noted, "It was hoped the event will give China a much-needed conducting focus." Competition juror Li Xincao, the principal conductor of the China National Symphony Orchestra, was quoted as saying: "We have many [world-class musicians], such as Lang Lang and Jian Wang, but we don’t have a top conductor." Cellist Jian Wang ’88CERT is a graduate of the Yale School of Music.

In the first stage of the competition, twelve candidates were chosen from 68 entries. Six semi-finalists were then selected to conduct the first movement of the Sibelius Violin Concerto, Beethoven’s Egmont Overture, and Tang Jianping’s Bao Leng Diao. The three finalists then conducted a selection of Brahms, Debussy, and Shostakovich.

The competition is named for Li Delun, who founded China's first professional symphony orchestra in the 1940s. In 1977 he conducted the first classical music performance since the beginnings of the Cultural Revolution ten years earlier; the performance (of Beethoven's Symphony No. 5, marking the 150th anniversary of Beethoven's death) sparked the re-emergence of classical music in China.