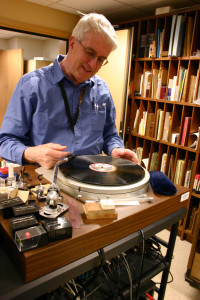 Richard Warren, Jr. (1937–2012), the curator of the Historical Sound Recordings Collection and the American Musical Theatre Collection at the Gilmore Music Library, died Sunday, October 7, 2012 at Yale New Haven Hospital following a stroke. He was 75.

Robert Blocker, Dean of the School of Music, said, "The recent loss of Rich Warren came as a great surprise to us. His devotion to the Yale Collection of Historical Sound Recordings enriched all of the programs at Yale, and will always be a legacy for future generations."

The Yale Daily News noted: "After graduating Phi Beta Kappa and magna cum laude from Yale, Warren returned to New Haven in the late 1960s and soon became curator of the Yale Collection of Historical Sound Recordings (HSR), a position he held for the rest of his adult life. During Warren’s 45-year tenure, colleagues said he relied on his remarkable knowledge of music and musical history to build Yale’s collection — one of the nation’s most comprehensive sound databases — by adding selections from a broad array of cultures and time periods. But those who knew Warren remember him most for his thoughtfulness and eagerness to help colleagues and researchers."

Richard Warren authored many articles on sound recordings, which were published in the ARSC Journal. His independent work includes a discography on Charles Ives and credit for assistance on many others, but his proudest work was in the reissue of historical recordings.

He is survived by his wife of over fifty years, Mary-Jo; their children and grandchildren; two younger sisters; and a number of nieces and nephews.

Richard Warren attended the Foote School in New Haven and graduated first in his class from Westminster School in Simsbury. He followed his father’s example, attending Yale College (1959, B.A., magna cum laude, Phi Beta Kappa). He then broke with tradition to attend Yale’s rival, Harvard, and graduated with an Ed.M in 1960. In Cambridge, MA, Rich met Mary-Jo. Their mutual love of choral and vocal music sealed the relationship. They worked in the Cambridge area for seven years before he followed his passion for music back to his alma mater to work in the Yale Collection of Historical Sound Recordings (HSR). In 1970 he was promoted to Curator of HSR. He frequently said he never wanted to retire, he and served 45 years right up until his illness. All his life, he retained a fascination with cats, trains, trolleys, and electronic gadgets.