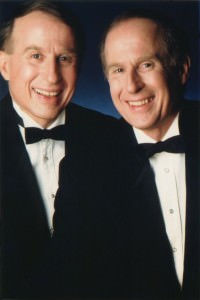 Duo pianists Richard and John Contiguglia (both ’59BA, ’61MM) are the winners of the 2012 Grand Prix du Disque, awarded last October by the Liszt Society of Hungary. The award-winning disc features Liszt's Operatic Fantasies and Bartók's Suite for Two Pianos.

The brothers noted, "Early in our career as a professional duo-piano team we discovered duos of Liszt and of Bartók that had never been previously recorded and had seldom been heard in modern-day public concerts. The duos of Liszt were only available from collections in museum archives or in rare Russian editions. We were so impressed with the quality of the music that we performed much of it on our recitals in Europe and in the United States and finally made, in the early 1970s, what came to be several historic recordings for Connoisseur Society Records. The resulting LPs have long since been unavailable and were never reissued as CDs. We are pleased to be able to offer once again the original Connoisseur Society recording of Liszt’s Operatic Fantasies and a live radio broadcast recording for VARA Radio in Holland of Bartók's Suite for Two Pianos, Op. 4b."

The American Record Guide wrote, “You owe it to yourself to seek out this recording – performances of this caliber are quite rare.”

Richard and John Contiguglia are identical twins who have collaborated as a piano duo since they were five years old. Following the release of their historic recording for Connoisseur Society of Beethoven’s 9th Symphony, transcribed for two pianos by Franz Liszt, now a collector’s item, critic Edward Tatnall Canby called the Contiguglias “the most profoundly musical pair of piano virtuosi of this century.” Records and Recording proclaimed that “they have given the two-piano medium a whole new dimension. The Contiguglias stand apart in a lofty world of their own, unrivaled and supreme.” Byron Belt, for Newhouse News Service, called the Contiguglias “foremost among today’s duo-pianists.”

Richard and John were born of Italian immigrant parents in Auburn, NY, the last children, and second set of twins, in a family of seven children. Without a doubt, the most extraordinary musical event of the twins’ youth was a performance in their home town, when they were 12 years old, of a group of two-piano pieces in the middle of a solo-piano recital by the legendary pianist-composer, Percy Grainger. Thus began an association with Grainger which led to a lifelong interest in the man and his music. Following their concert together, Grainger presented the young pianists with many of his two-piano scores, some with touching dedications: “To Richard and John Contiguglia, from their admiring colleague;” “in admiration of their splendid playing;” “in tonal fellowship.” Throughout their career Richard and John have programmed and recorded a great deal of Grainger’s music. They presented an all-Grainger chamber music concert at the Caramoor Festival in 1981; they broadcast several programs of Grainger’s music over National Public Radio during the Grainger Centenary Year, 1982; they released three albums of Grainger’s music, a Grainger-Gershwin LP for MCA Classics, a Grainger-Bolcom CD for Helicon Records, which included Grainger’s Lincolnshire Posy, Hill Song No. 1, and Children’s March, and a Grainger-Gershwin CD on the Gemini CD Classics label, which, in addition to many Grainger favorites, such as Country Gardens and Molly on the Shore, includes all of the Grainger-Gershwin transcriptions, including the Fantasy on ‘Porgy & Bess’ for two pianos.

For over a decade the Contiguglias had performed Percy Grainger’s masterful two-piano Fantasy on George Gershwin’s ‘Porgy and Bess’ on recital programs throughout the world. As they became more familiar with the Gershwin original, they realized that, despite all of Grainger’s ingenuity, there were details missing from the two-piano score which give special meaning to the texture and color of the music. To add these details to the Grainger score, the Contiguglias commissioned orchestrator, Tom Kochan, in 1993, to turn Grainger’s Fantasy on George Gershwin’s ‘Porgy and Bess’ for two pianos alone into a Concerto for Two Pianos and Symphony Orchestra. Of a performance of this new-born concerto with the Seattle Symphony in 1998, Newhouse critic Byron Belt wrote: “The performance was a smashing success - acclaimed by a packed Seattle Center Opera House crowd with enthusiastic cheers. - Grainger’s Fantasy is a superb score, the Contiguglias, a magnificent pair of pianists, the orchestral additions, terrific.”

An important part of the Contiguglias’ career has involved discovering, performing and recording unusual and forgotten works from the duo-piano repertoire. With the Cleveland Orchestra they revived Victor Babin’s Concerto for Two Pianos and Orchestra to rave acclaim from the Cleveland press. They gave the New York premiere with the American Symphony Orchestra in Carnegie Hall of Max Bruch’s Concerto for Two Pianos and Orchestra. They gave modern-day premieres and released first-recorded performances of many works of Bartók and Liszt, including the former’s Suite for Two Pianos, Op. 4b and the latter’s transcription for two pianos of Beethoven’s 9th Symphony. Other modern-day, Liszt premieres included his two-piano versions of the Operatic Fantasies on ‘Norma’ and ‘Don Giovanni’ and the piano, four-hand versions of the Fantasy on ‘La Sonnambula’ and the Beethoven Fest Cantate. Their recording of the Beethoven-Liszt 9th Symphony was awarded a Grand Prix by the Liszt Society of Budapest in the first record competition of the Society’s history. The recording was a best-seller throughout the world and was licensed by Phillips for release in Japan, where it created a sensation. The Contiguglias’ performance of the 9th from memory at the 1984 Holland Liszt Festival prompted a Dutch critic to describe the Contiguglias as “in a class by themselves” and led to three reengagements by the Liszt Festival plus performances throughout The Netherlands, including engagements with many of Holland’s major orchestras.

One of the most unusual modern-day premieres given by the Contiguglias at the Holland Liszt Festival was of Liszt’s unpublished duo, Grosses Konzertstück über Mendelssohns ‘Lieder ohne Worte’. A major, unpublished work, over 20 minutes long, the Konzertstück, based on 3 of Mendelssohn’s Op. 19 Songs Without Words, waited 152 years to be heard in toto. Its scheduled premiere in Paris in 1835, by Liszt and a pupil, was cut short, when Liszt collapsed at the piano during its performance. Subsequent attempts to perform the work met with equal failure. Busoni died before a scheduled premiere in London with Egon Petri. The originally scheduled premiere by the twins in Utrecht, Holland, had to be canceled, because the 58 page score had been confiscated by Dutch customs agents, suspicious that the smudged manuscript copies from East Germany masked coded espionage secrets. Finally, the premiere of this ‘cursed piece’ took place by the Contiguglias in Holland and was followed by performances by them in New York, Chicago and other American cities.

The Contiguglias’ inquisitive musical natures developed in part from their academic training. They received their B.A. degrees from Yale, summa cum laude, and were elected to Phi Beta Kappa in their junior year. At graduation they were awarded the Charles Seymour Prize, jointly, for achieving identical academic averages of 91, the highest in the graduating class of Berkeley College, their residential college at Yale. They received their M.Mus. degrees from the Yale Graduate School of Music. Although both twins majored in music at Yale, John took many elective courses in chemistry, and Richard, in English literature and philosophy. At Yale the Contiguglias studied piano, as soloists, with Bruce Simonds. Subsequently, they studied the duo repertoire for four years with the legendary British pianist, Dame Myra Hess, who prepared them for their important London Wigmore Hall debut and for their first European tours.

Early in their career, during the Vietnam War years, the Contiguglias were on a tour of the Pacific, which took them to Hawaii and Guam. While in Guam they gave an impromptu Christmas concert at the US Naval Hospital. After the concert, which included works of Mozart, Schubert, Brahms and Hindemith, one young American told them, “Until today, I never realized the power of great music to make one forget the problems of this world. It’s better than LSD.” Richard and John were so moved by this experience that, when they returned to the States, they performed, whenever possible, through an organization called Hospital Audiences, in veterans’ hospitals, nursing homes and mental hospitals in the New York area. One of the highlights of these performances for the shut-ins was a collaboration with narrators Glenn Close and Jeremy Irons in a performance of Saint-Saens’ Carnival of the Animals.

Schubert has always been a special love of the Contiguglias, not least because he wrote some of his greatest chamber music for two pianists at one piano. One of the last directives that Dame Myra gave to them was to “devote your lives to making audiences aware of the Schubert duets.” Throughout their careers the Contiguglias have striven to introduce a wider public to this little-known repertoire. At Schubertiade 1993 - Schubert and the Piano at the 92nd St. Y in New York City, they lectured and performed at the Marathon Symposium. They were reengaged to participate at the final Schubertiade of the 92nd St. Y’s series in 1995.

Richard and John Contiguglia have performed with major orchestras throughout the world, including the Cleveland Orchestra, the Pittsburgh Symphony, the Atlanta Symphony, the National Symphony, the Toronto Symphony, the Boston Pops, the Netherlands Chamber Orchestra and the Rotterdam Philharmonic. In 1999, they were invited by conductor Jorge Mester to perform Bartók’s Concerto for Two Pianos, Percussion and Orchestra with the Orquesta Filarmonica De La Ciudad De Mexico as part of a Bartók commemorative season featuring all of the composer’s concertos. They have performed in numerous prestigious venues, including Carnegie Hall and Lincoln Center in New York, the Kennedy Center in Washington, Orchestra Hall in Chicago, Queen Elizabeth Hall in London, and the Concertgebouw in Amsterdam. Their recital at the Lobero Theatre in Santa Barbara, California, for the Music Academy of the West, was chosen by the Santa Barbara News Press critic as one of the “best musical events of the year 2000.” The Contiguglia twins have been seen on national television in Holland, Great Britain and the United States. On Nov. 25, 2008, Richard and John were the featured lunchtime pianists at London’s National Gallery for Dame Myra Hess Day, 2008, an event that called to mind the famous lunchtime National Gallery Concerts that Dame Myra organized during World War II. They were featured on ABC’s Live with Regis and Kathy Lee, NBC’s The Today Show and the A&E Channel.