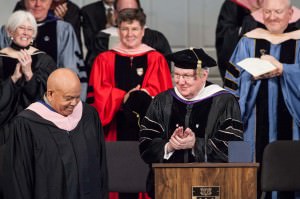 Willie Ruff ’53BM, ’54MM received the Sanford Medal, the School of Music's highest honor, this past Monday, May 20. Dean Robert Blocker presented the medal at the School's Commencement ceremonies in Sprague Hall. The award honors Ruff's contributions to the Yale School of Music and to the field of music.

A musician and scholar of wide-ranging interests and influence, Willie Ruff plays French horn and bass and is an author, lecturer, and educator. After graduating from Yale, he joined Lionel Hampton’s band and soon collaborated with his friend, pianist Dwike Mitchell, to form the Mitchell-Ruff Duo. The duo performed on the bill with major jazz figures, including Dizzy Gillespie, Louis Armstrong, Duke Ellington, and Count Basie, in every major nightclub. In 1959 they introduced jazz to the Soviet Union, playing and teaching in Russian conservatories, and in 1981 they did the same in China.

On faculty at the Yale School of Music since 1971, Professor Ruff has also been on faculty at U.C.L.A., Dartmouth, and Duke University. He is the founding director of the Duke Ellington Fellowship program at Yale, and his work in bringing jazz artists to Yale and New Haven public schools earned him the Governor’s Arts Award in 2000. Click here (Yale Bulletin) and here (Yale Daily News) for articles on the Fellowship's 30th anniversary in 2002. 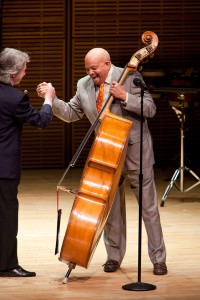 In addition to teaching Yale courses in arranging, ethnomusicology, and folklore, as well as the Interdisciplinary Seminar on Rhythm, Willie Ruff has led many conferences and research projects exploring music’s wide-ranging impact. He has organized an international conference on the Neurophysiology of Rhythmic Perception and created computerized music based on the theories of seventeenth-century astronomer Johannes Kepler.

Mr. Ruff’s work on congregational line singing involved a 2005 conference at Yale comparing the traditions practiced in Alabama, Kentucky, and the Gaelic-speaking Free Church Presbyterians in the Scottish Highlands. This conference resulted in three television documentaries and a feature story for NPR’s “Morning Edition.” His line-singing project continued in 2007 with a conference that included the Muscogee Creek Nation in Oklahoma.

Ruff’s memoir, A Call to Assembly, published in 1991 by Viking Press, was hailed by the L.A. Times as "an unmitigated delight" and received the Deems Taylor Award for excellence in a book on music. Ruff has also written on music and dance in Russia, and on the introduction of American jazz in China, where he has lectured in Mandarin. His second book, Six Roads to Chicago, is "a cultural study of an emerging city that wanted to be 'the Paris of the Prairie,' wrote the Hartford Courant.