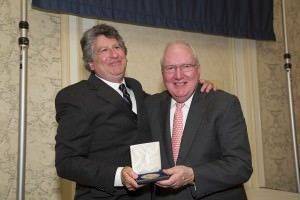 The team of Kurtz and Jack Allocco won for Outstanding Achievement in Music Direction and Composition for a Drama Series, for their work on The Bold and the Beautiful on CBS.

Kurtz and lyricist Allocco also won the award for Outstanding Original Song for a Drama Series, for their song "Only Love Goes on Forever" on CBS's The Young and the Restless.

Kurtz is the winner of several previous Emmy Awards for his work on television shows such as The Young and the Restless and The Bold and the Beautiful. He has also contributed to the music for movies including The Big Chill and Instant Justice. In May, the Yale School of Music honored him with the Sanford Medal.