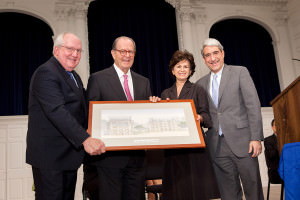 At Convocation on Monday, September 9, 2013, Dean Robert Blocker and Yale President Peter Salovey announced that the music complex centered around the renovated and expanded Hendrie Hall will be known as the Adams Center for Musical Arts when it opens in 2016.

In 2006, Stephen Adams '59BA and his wife, Denise Adams, donated $100 million to the School of Music. The gift, which Mr. and Mrs. Adams originally made anonymously, allowed all School of Music students from that point onward to attend tuition-free; it also enriched the educational experience through enhanced programs at the School.

Stephen Adams' interest in music began not at Yale but later in life. When he turned 55, he began playing the piano as a hobby. “That sparked my interest in music and I made the decision soon after to give the [first] gift,” Mr. Adams told the Yale Daily News in a 2009 interview. 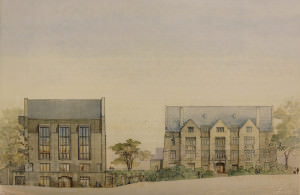 In 1999, in honor of his 40th reunion, Mr. and Mrs. Adams donated $10 million to the School of Music, which was then the largest contribution the school had ever received. Their $100 million gift followed six years later, though their identity wasn't revealed until 2008. The Adams have also made a $10 million pledge toward the renovation of Hendrie Hall.

Dean Blocker said, "The extraordinary gifts of Denise and Stephen Adams have transformed the School of Music and Yale University. Their philanthropy has enabled us to make our dreams realities, and to advance the cause of music and cultural leadership throughout the world."

2013 marks ten years since Sprague Hall reopened after extensive renovations. Leigh Hall was renovated in 2006, and Stoeckel Hall in 2009. At Convocation, Yale President Peter Salovey noted, "On the tenth anniversary of the reopening of Sprague Hall, we announce the creation of something else." That something else is the Adams Center for Musical Arts.

Beginning in the summer of 2014, Hendrie Hall will close for renovation and expansion. The work is scheduled to take two years, during which activities that usually take place in Hendrie will temporarily be moved to other locations. 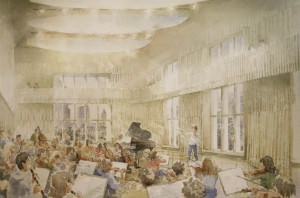 When the complex reopens in 2016 as the Adams Center for Musical Arts, students will enjoy state-of-the-art rehearsal facilities, faculty studios, and practice rooms, as well as a student commons space. A covered loggia will connect the center to Leigh Hall.

Hendrie Hall, which is shared by the Yale School of Music and Yale College, offers Yale’s largest rehearsal spaces. The building is the home of Yale Opera and the School of Music’s brass and percussion departments, as well as the Yale Philharmonia library. Hendrie also houses offices and practice space for the University’s major undergraduate musical organizations: the Yale Bands, Yale Glee Club, and Yale Symphony Orchestra.

Denise and Stephen Adams are members of the School of Music's Board of Visitors.