Peter Gelb, General Manager of the Metropolitan Opera, was awarded the Samuel Simons Sanford Award — the highest honor that the School of Music can bestow—at Convocation on Monday, September 9. Below is Dean Blocker's citation, followed by Peter Gelb's remarks.

In August 2006, Peter Gelb was named the 16th General Manager of the Metropolitan Opera. His visionary and entrepreneurial leadership has revitalized not only the Met but also the entire field of opera. Actually, Peter is an artist's artist who has pioneered a digital and live audience accessibility to opera that few could have imagined, let alone achieved. 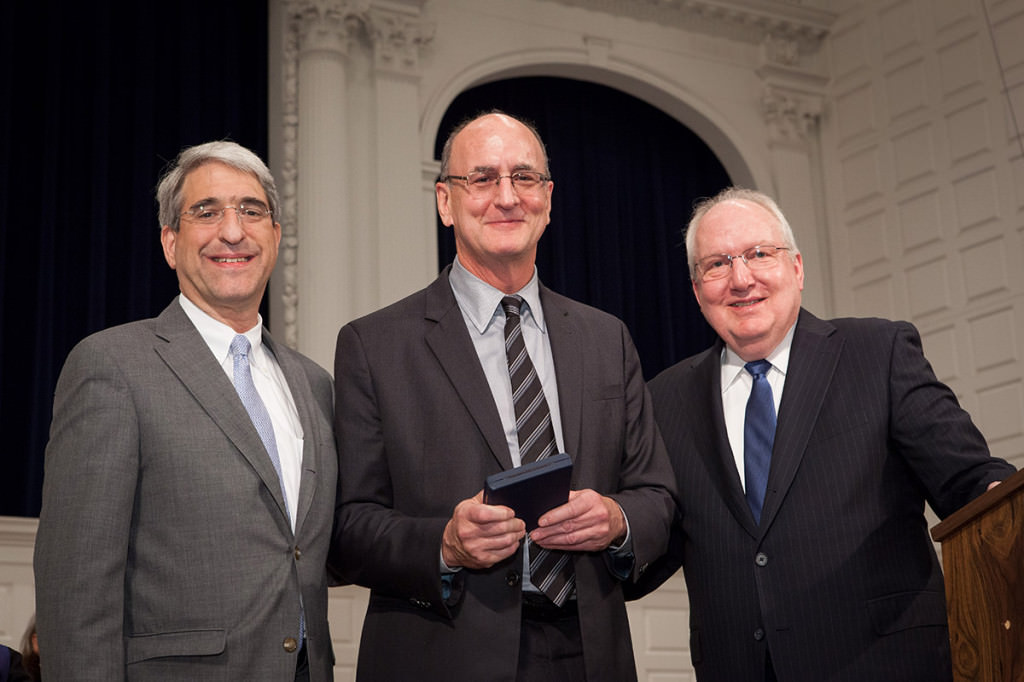 His extensive and varied experience in the field of classical music has prepared him for the considerable challenge of overseeing both the artistic and administrative aspects of one of the largest performing arts institutions in the world. As an award-winning producer of films, recordings, radio broadcasts, telecasts, concert events, operas, and festivals, he worked with many of the world's leading artists prior to becoming general manager, including Vladimir Horowitz, Herbert von Karajan, Rostropovich, Luciano Pavarotti, and Placido Domingo. His close association with Met Music Director James Levine extends back two decades and spans recordings and film (Fantasia 2000).

In 1982, Mr. Gelb founded CAMI Video, a division of Columbia Artists Management, and served for six years as executive producer of the Met's television series "The Metropolitan Opera Presents." From 1995 until becoming the Met's general manager, he was president of Sony Classical, a record label.

As a teenager, Peter Gelb worked as an usher at the Met. In 1979, he managed the Boston Symphony Orchestra's tour to China and in 1986 produced Vladimir Horowitz's return to Russia. He has received honorary doctorates from Hamilton College and the Macaulay Honors College of the City University of New York. Time magazine named him in its 2008list of the world's 100 most influential people. In 2010, France honored him as an Officer in the Order of Arts and Letters, and in May 2012 he received the Diplomacy Award of the Foreign Policy Association. Most recently, in July 2013, he was newly named Knight of the Legion of Honor by the French President.

Peter Gelb has helped change the perception of opera with the Met's Peabody and Emmy Award-winning Live in HD series of performance transmissions to movie theaters around the world. The series has sold more than 12 million tickets since its inception in December 2006 and is currently seen on more than 1,900 screens in 64 countries across six continents. The Met's HD programs have raised global awareness of opera, inspiring other institutions throughout the world that are in need of revitalization. This summer, YSM was one of the first institutions providing the new Met On-Demand Access for Students with an archive of 400 audio and video productions.

I’m very grateful to Dean Blocker and President Salovey for this distinguished award and for kindly overlooking my record of academic underachievement at Yale when I briefly attended college here some 40 years ago. As a freshman in 1973, I went to classes for only about a week, although I did manage to last one semester on campus, while continuing to attend to my duties as the undergraduate Director of Information at the Yale School of Music.

Perhaps my most unfortunate act was lighting a fire in my basement office fireplace in Stoeckel Hall, not realizing that the flu in the Dean’s fireplace one floor above me was closed, which regrettably caused his office to fill with thick smoke. Luckily for me, he wasn’t in it at the time. Nonetheless, in spite of this, I now regularly receive Yale Alumni Bulletins.  I am a drop out who has found redemption, now more than ever as the recipient of the Sanford Award.

Although I am not suggesting that I am a role model for alternative learning, it is true that a lifetime of rich experiences provided my education, from being the teenage assistant mailroom clerk of the great Russian immigrant impresario, Sol Hurok, to becoming the 25 year-old assistant manager of the Boston Symphony Orchestra; from managing the final comeback of the legendary pianist Vladimir Horowitz and producing a concert of spirituals with Kathy Battle and Jessye Norman in my thirties; to running a global classical record label in my forties; to my current job of fighting an uphill battle to keep grand opera thriving at the Met – a position I was appointed to eight years ago.

In 1982, when discussing the acoustics of Woolsey Hall with Horowitz, who was considering a recital there, he patiently explained to me, “If the check is good, acoustics are good.” While this didn’t teach me anything about acoustics, it did teach me about the practical side of his genius.

In 1989, I made a documentary film about the return to the Soviet Union of the great cellist Mstislav Rostropovich and his wife, soprano Galina Vishnevskaya, who had both heroically defied the supreme Soviet leader Brezhnev by harboring dissident writer Alexander Solzhenitsyn in their dacha, before all three of them were expelled.

Upon their return to the Soviet Union after ten years of exile, Rostropovich remained an indomitable force in the face of suppression and adversity. While filming him, Rostropovich said  that his mentor, the great composer Shostakovich, who himself was the victim of Stalin’s oppression, taught Rostropovich as a young cellist that his fate would be to follow Shostakovich’s mission; that like Shostakovich he was destined to be a “soldier of music.” Indeed, for Rostropovich, that became his life-long credo.

Today, with symphony orchestras and opera companies threatened by rising cost structures and declining audiences, it is more important than ever that we fight to make classical music accessible in order to win new audiences. I am not suggesting that we should lower our artistic standards, but we should strive to create art that can be appreciated by a wider audience. As I wrote two weeks ago in a column for Bloomberg, “the notion that high art can also be entertainment is anathema to those who think that genius is not suited to accessibility.” As composers from Wagner to John Adams have proven, that is not, in fact, the case.

I have spent my life attempting to connect music with a broader audience. In this, I consider myself to be a soldier of music, and I hope that you will think of yourselves as soldiers of music, too, since the struggle to keep classical music popular can only be won with new generations of musical soldiers joining the battle.