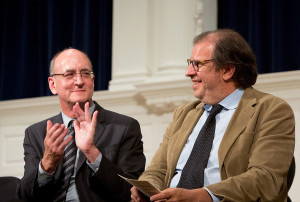 Thanks to the generosity of Yale alumnus Frederick Iseman '74BA, the Yale School of Music and the Gilmore Music Library now offer Met Opera on Demand: Student Access.

There are more than 300 radio broadcast performances dating back to 1936, representing nearly all of the most popular operas as well as many of the Met's greatest singers including Björling, Callas, Corelli, Horne, Nilsson, Sutherland, Tebaldi, Te Kanawa, and Tucker.

Iseman's gift was announced to the School of Music at Convocation on September 9. Peter Gelb, General Manager of the Metropolitan Opera, was present; Gelb received the Sanford Award, the School of Music's highest honor, at the event.

Iseman is the donor who brought the Metropolitan Opera’s Live in HD broadcasts to campus. The Iseman Met Opera Broadcasts are presented in Morse Recital Hall free of charge and are open to members of the Yale community.

Dean Robert Blocker commented, "Frederick Iseman's recent gift of the Met Opera On Demand: Student Access is a fitting bookend to the Iseman Broadcasts Live in HD at the School of Music. Fred's philanthropic generosity to Yale and to YSM for these opera programs enriches us all, and we are indeed grateful."

Suzanne Lovejoy, Assistant Music Librarian for Public Services, noted several ways in which Met Opera On Demand will complement current library holdings. Previously, the library's holdings relating to the Met included approximately 450 recordings in various formats (78rpm, LP, CD), plus about 50 recordings in online databases such as Naxos and Classical Music Library. Those online recordings feature the Met orchestra and/or chorus, but are not likely to be full operas. The library also has approximately 75 videos or DVDs; approximately 200 books and pamphlets (none of which are online); periodicals, including online full-text of Opera News from 1990 forward; and scores and archival collections. The new access to Met Opera On Demand, therefore, greatly increases the library's Met Opera-related holdings.

All Met Opera on Demand videos include English subtitles, and many recent performances also include subtitles in French, German, Italian, Portuguese, Russian, and Spanish. New operas are added every month, and an app allows users to bookmark favorites and return to them anytime.