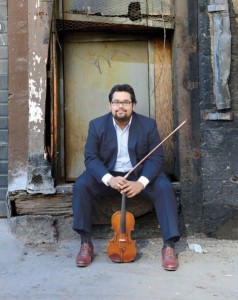 On a sweltering day in late August, Los Angeles Philharmonic violinist Vijay Gupta steps in front of a crowd and bows his head to polite applause. He glances at the audience and surveys the cellist and violist to his left. He takes a breath, lifts his 2003 Krutz violin and tucks it under his chin. Once it’s settled, he slowly pulls the bow across the strings. As the first strains of the “Passacaglia” by George Frideric Handel and Johann Halvorsen usher forth, the murmurs of the crowd go mute.

While the scene is one that audiences at Walt Disney Concert Hall pay up to $266 a ticket to take in, no one here has spent a cent. In fact, many in the packed room at Skid Row’s Midnight Mission know little about classical music and even less about the men playing in front of them. Still, the approximately 100 people, many of whom sleep on the streets at night, sit rapt on their blue plastic chairs. They remain largely quiet — if not as silent as Disney Hall crowds — during the 45-minute performance.

When it ends, the crowd busts into raucous applause. Screams of “Encore!” are heard. One man, sitting amidst plastic bags of his belongings, belts out a curious request for Ice Cube. Gupta and his fellow musicians, Jacob Braun and Ben Ullery, smile widely and bow.

Skid Row may seem an unlikely place for a classical concert. In fact, it was, prior to Street Symphony, a nonprofit organization founded by Gupta in 2011. The New York native was just 24 at the time, though he had already been a member of the Phil for five years. He was the youngest player in the orchestra when he joined at the age of 19, and at 26 today, he’s still the youngest.

Street Symphony is an ensemble of socially conscious musicians dedicated to bringing live, classical music to the mentally ill, imprisoned, homeless and the otherwise marginalized members of society. Gupta founded the group with Adrian Hong, a human rights activist and the managing director of consultancy Pegasus Strategies, and Adam Crane, the former director of public relations for the L.A. Phil who now serves as vice president of external affairs for the St. Louis Symphony.

The path that brought Gupta to Skid Row is as twisting as it is unlikely, and though he has now played the Mission three times, it’s clear that it’s a visceral experience for the man who suffered his own mental abuse while growing up. The normally loquacious violinist is prone to becoming overwhelmed with emotion when discussing the physical, psychological and spiritual struggles of his non-Disney Hall audience.

“I’m this privileged musician,” he said recently. “Who the hell am I to think that I could help anybody?”