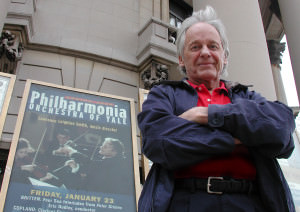 Today, the Colorado Springs Philharmonic announced with sadness the death of Lawrence Leighton Smith, their beloved music director emeritus. Smith died at home on Friday, October 25, 2013 in the company of his family. He was 77.

Born April 8, 1936, Smith was one of the most respected American conductors of the 20th and 21st centuries. His brilliant conducting career began in 1973 when he became a first prize winner of the Dmitri Mitropoulos Competition. Smith went on to appear with nearly every major orchestra in the United States and to tour internationally.

As music director of the Louisville Orchestra from 1982 to 1993, Smith earned international recognition for both live performances and recordings. He also served as music director of the Austin, Oregon, and San Antonio Symphonies. He became the first American conductor of record to conduct the Moscow Philharmonic, creating the widely acclaimed “Moscow Sessions” recordings.

Known for his commitment to working with student musicians, Smith led many performances at the Yale School of Music, as well as the Manhattan School of Music. During his ten years at Yale (1995–2004), he was the music director of the Yale Philharmonia and the head of the conducting program. A native of Portland, Oregon, Smith was also an accomplished pianist and started his music career as a piano soloist.

He began his conducting career at Tanglewood as a musical assistant to Erich Leinsdorf, also spending time at the Peabody School of Music. He is a recipient of three honorary doctorates and, with the Louisville Orchestra, fourteen ASCAP awards for adventurous programming. As music director of the Colorado Springs Symphony, Smith was instrumental in the rebirth of the orchestra as the Colorado Springs Philharmonic in 2003. He was succeeded by current music director Josep Caballé-Domenech.

In keeping with Smith’s wishes, there will not be a public funeral or memorial service. A celebration of Smith’s life will be held in Colorado Springs the weekend of November 16–17, 2013; details will be announced at a future date. The Colorado Springs Philharmonic has established a Facebook Page where friends, students, and admirers of Smith can post their stories about him and his life. Additional information will be posted to the page as it becomes available. VISIT PAGE