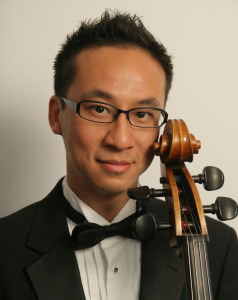 Cellist Alvin Wong '09AD, '11MMA has been appointed Lecturer of Music (Cello) at the Melbourne Conservatorium of Music at the University of Melbourne, Australia. Mr. Wong will commence his post in January of 2014.

A native of Hong Kong, Alvin started playing the piano at the age of three but did not study the cello until he was 14. After winning some local competitions, he continued his cello studies at the Eastman School of Music while pursuing a Bachelor of Arts degree in biology. He received his master's degree from the Indiana University Jacobs School of Music, where he was also an Associate Instructor in Music Theory.

Wong earned his Artist Diploma from Yale in 2009 and his Master of Musical Arts degree in 2011. His major teachers are Aldo Parisot and Janos Starker. Currently on the faculty of Connecticut College, Wong is also the principal cellist of the Eastern Connecticut Symphony Orchestra.

Alvin Wong has appeared in concerts across five continents. He has performed in venues such as Carnegie Hall, Seoul Arts Center, and Hong Kong Cultural Center; and in music festivals such as Aspen, Orford, Fontfroide, Sion, Casals in Prades, and Great Mountains.

A recent interview quoted Wong as saying, "I'm extremely lucky to have attained the position at the University of Melbourne. But my goal doesn't stop here. I want to nurture a generation of musicians and artists who would use their talents to connect people in the community. That's what our society needs right now."