Opera by Kevin Puts '96MM will have its television premiere Dec. 13, in a performance by the Minnesota Opera 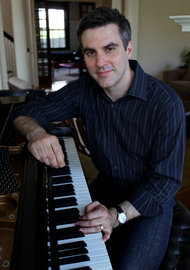