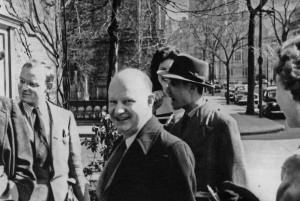 If, as Shakespeare famously wrote, every man in his time plays many parts, it should come as no surprise that various observers will see him differently over time. The time span needn’t even be a particularly long one. Consider the case of the 20th-century composer Paul Hindemith. While in exile to escape the Nazis, Hindemith taught at the Yale School of Music and, in that capacity he mentored a distinguished group of younger composers whose music is being performed, along with that of Hindemith himself, on Nov. 22 in a concert tribute “Hindemith at Yale.” Of the five Hindemith protégés whose work will be on the program, the two who are still alive have recollections of Hindemith that seem to be calculated to make the listener think they are discussing completely different, albeit potent, teachers.

The two living composers are, themselves, quite different from one another. Mitch Leigh is undoubtedly best known as the man who wrote the music for “Man of La Mancha” and other Broadway musicals, but he began his professional career in the music department of Warner Brothers and enjoyed a long and prolific career writing radio and television commercials before essaying musical theater. Yehuda Wyner is the son of Lazar Weiner, himself a distinguished creator of Yiddish art songs and other concert music. Wyner followed the career arc of his mentor, winning the Rome Prize, the Pulitzer and two Guggenheim fellowships, composing and writing a wide range of Western art music and joining the faculty at Yale, where he followed in the footsteps of Hindemith and his fellow Hindemith student Mel Powell as chair of the composition department.

Intriguingly, all of the former Hindemith students whose music will be performed on Nov. 22 are Jewish; the program features works by Wyner, Leigh, Lukas Foss, Alvin Etler and Mel Powell (whose family name was Epstein until his then-employer Benny Goodman urged him to change it).

When asked about this apparent coincidence, Leigh laughs heartily and says, “To call somebody a Jewish composer is obviously redundant.”

He recalls a lunch in Manhattan with Darius Milhaud, another Jewish composer of distinction.

“He said to me, ‘I suppose you thought [Hindemith] was Jewish,” Leigh recounts. “I told him it had never come up, and he said, ‘Well, he wasn’t, but his wife had a Jewish grandfather.’”

Echoing Leigh’s observation about Hindemith and Jewish identity, Wyner says, “I never heard him utter a word about sectarianism. Ever.”

Hindemith was definitely persona non grata in Nazi Germany. Nazi hatred of the composer was probably rooted less in the dubious “Aryan-ness” of his wife than in his championing of the music of “degenerate” composers and his own opposition to the new German government. (Readers of these pages will recall that several weeks ago there was a concert recreating the 1927 Baden-Baden festival program curated by Hindemith that included music by Kurt Weill, Ernest Krenek and Milhaud, all Jews and purveyors of musical modernism.)

For the Brooklyn-born Leigh, Hindemith’s influence began even before the younger man arrived in New Haven.