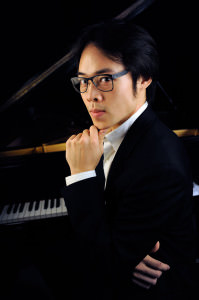 The Hour Online
By Mike Horyczun

Although he's not judging the competition, one of Chu's duties this year will be to address the audience on Sunday, before the six finalists return to the stage to perform for the final judging. "I think I want to be very encouraging to them and help them to understand the competition a little bit differently," said Chu, speaking by phone during a recent interview. "Sometimes competition makes people very nervous. We have to, as a performer, enjoy the performances and take advantage to use the opportunity of each time playing in public to share the music itself."

Chu has had plenty of experience doing that. He has performed as a soloist with the Calgary Philharmonic Orchestra, New England Conservatory Orchestra, the Cape Cod Symphony Orchestra, and the Tianjin Symphony Orchestra. He received his Bachelor and Master of Music degrees from the New England Conservatory on full scholarship. He was also the first undergraduate there to receive the Presidential Scholarship in two consecutive school years and later become the first recipient of the Burnes Family Award. He is currently attending the Artist Diploma program at the Yale University School of Music.

Chu always looks for opportunities to experience and share his music with other people. "Every time there's something unexpected," he said. "Even though you've been practicing every day, you always have some space. It is the nature of music itself to give you room to imagine onstage. The piano is different, the stage is different. The music making is always a little bit different. It depends on the acoustics. It depends on the piano. That's what I'm excited about. In that kind of situation, every time I'm creating a little bit different, here and there."