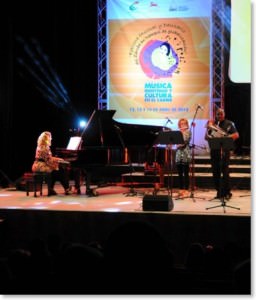 In addition to Gangelhoff, a flutist, C Force is made up of Christian Justilien, euphonium, and Christy Lee, piano. The performers are all faculty members at The College of The Bahamas in Nassau on the island of New Providence.

Deep Blue, the group's newest release, is a reflection of their commitment to the preservation and promotion of music from The Bahamas and the neighboring Caribbean region. It is a compilation of original compositions, transcriptions, and arrangements of pieces written in a classical vein while manifesting elements of Bahamian folk culture in the use of theme, rhythm, and melody.

As The Bahamas celebrates its 40th year of Independence, Deep Blue features a combination of works by Bahamian composers and poets as well as pieces inspired by the islands of The Bahamas and their surrounding waters. Included on the disc are works by E. Clement Bethel, Franz Hepburn, K. Quincy Parker, Christian Justilien, Terry Manning, and Lucas Manning. Also featured are artwork by John Cox, poetry by Marion Bethel, and photography by Jeff Major. 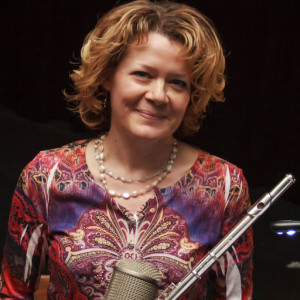 Christine Gangelhoff, flutist, holds degrees from the University of Minnesota, Yale University, and the University of North Texas. She has been an active free-lance musician in both Minneapolis, Minnesota and Vancouver, British Columbia, having performed with the Minnesota Orchestra, St. Paul Chamber Orchestra, Oregon Symphony, Portland Ballet, and the Vancouver Island Symphony, as well as several chamber ensembles. She is heard on recordings with the Minnesota Orchestra and the Sunriver Music Festival in Sunriver, Oregon.

In addition to classical performance, she has performed and recorded with The Seven Thieves, a celtic/world music ensemble, and Prague’ 24, a Minneapolis-based klezmer band. Other engagements have included performances with reggae/ska group the Big Up and the traditional Balkan ensemble Grupa Dunbarov, as well as a special guest appearance with the British rock band Jethro Tull.

She has taught at several universities and music schools including the University of St. Thomas, Portland State University, Douglas College, Casper College, the Isador Bajic Music Academy in Novi Sad, Serbia, and the ‘Atenisi Institute in the Kingdom of Tonga. She was visiting Professor of Flute at Memorial University in St. John's, Newfoundland, until taking up her current post as Assistant Professor of music at the College of the Bahamas.

Christine is an active member of the Board of the Nassau Music Society and is currently one of the Vice-Presidents responsible for scholarships.