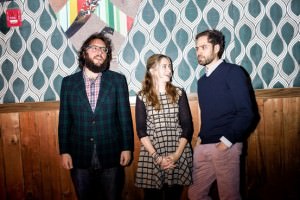 On a recent evening in Williamsburg, a hipster headbanged along with the JACK Quartet's rendition of William Brittelle's "Future Shock," which, while pop-sounding and electronic, had intricately layered string riffs and a classical structure.

The performance was part of a benefit for New Amsterdam Presents, which, along with its record label, has become an advocate for a corner of New York's new-music scene that doesn't quite belong—and doesn't want to.

It has been a good year for the label. In addition to a handful of Grammy nominations, this year's music Pulitzer was awarded to Caroline Shaw, for a work recorded on New Amsterdam. The group's Red Hook office space has largely recovered from superstorm Sandy, although some questionable mold remains.

And a residency with the Indianapolis Symphony Orchestra has helped it move, albeit slowly, toward creating visibility and infrastructure for a type of music that has remained largely rooted in Brooklyn.

In 2008, there was no logical label for the music that Mr. Brittelle, 37 years old, along with fellow composers Sarah Kirkland Snider, 40, and Judd Greenstein, 34, wanted to create.

"We felt like, 'Where's the generation who reads the New Yorker and goes to see experimental films?'" said Ms. Snider. "The three of us were writing a kind of classical music that we saw as having the potential for more than just a very elite classical audience."

They set up shop in Mr. Greenstein's childhood bedroom, and a record label was born.

While many describe New Amsterdam's aesthetic as "indie classical," its founders prefer to scrap the concept of genre altogether.

"Style has been emancipated," said Mr. Brittelle. "It's almost like what's happening in gender politics, or other parts of our society. People have so many options about how they can be and how they choose to identify."

In the past five years, New Amsterdam has released 48 albums. This year, nearly two-thirds of its revenue came from digital sales.

New Amsterdam, which has a distribution agreement with the bigger classical-music label Naxos, has faced the same problems as any other in an increasingly digital world. It begrudgingly places its albums on the music-streaming service Spotify—hoping the exposure is worth it, even if each play nets the label only about half a penny—and struggle over how to support artists' Kickstarter campaigns that offer free albums as rewards, which affects album charting.

While New Amsterdam's variety of music makes some purists uncomfortable, said Ms. Snider, she and her co-founders aren't trying to change classical music or make a statement about what it should be. Instead, they want to support the infrastructure—recordings, performances and an audience—for music with one foot in both the classical and pop worlds.