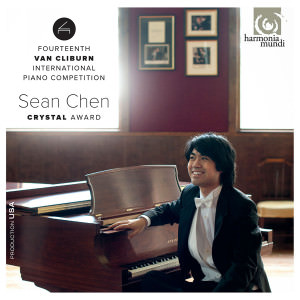 To call Van Cliburn Competition winner Sean Chen’s performances of Brahms, Beethoven, and Bartok “crystalline” does more than make a pun, as you can hear for yourself.

Recorded in concert 24 May 9 June 2013 at Bass Performance Hall, Fort Worth, Texas, this composite recital by Sean Chen celebrates his participation at the Fourteenth Van Cliburn International Piano Competition. Chen has chosen three works from distinct musical periods and aesthetics that realize aspects of his own consummate musicianship, the variation principle tying the works together.

Chen opens with the 1861 set of Brahms Variations on a Theme in D Major that exploit the composer’s fascination with counterpoint and Baroque ideals, its “method” of inventions and canons, transforming the theme into multifarious personalities in the form of a march, a musical box, an etude, a nocturne, and their concomitant textures. Many of the more passionate and flamboyant permutations, along with their “learned” companions, anticipate the monumental technique and breadth of the Op. 24 Handel Variations. Brahms moves the opus into four sections, utilizing major mode, minor mode, bravura developments, and the finale that restores the soft affect of the original appearance of the theme. Chen’s intent, beyond the bravura display, wants to project the innate beauty of tone of which he is perfectly capable.

Chen takes the opening Allegro movement of the massive Hammerklavier Sonata(1818) of Beethoven on a more lyrical path than is often its wont. Monumental and orchestral sonorities suddenly evaporate into delicate filigree in runs and brittle chords. The dance element of Beethoven’s mighty character has not been lost, so Chen can insert wit as well as drama into the epic alchemy of this grand design. A wonderful surprise lies in the ensuing Scherzo, supple, athletic, and brilliantly lit by Chen’s expressive alternations in tempo and textural balance.

The next two movements present Chen with epic pillars of thought and motion. To sustain tension and vocalism over the course of the over-quarter-hour Adagio sostenuto challenges the performer to accomplish on a single keyboard what string quartets can realize in their medium and the whole symphony orchestra has the Ninth Symphony to unravel. The F-sharp Minor labyrinth of the Adagio rarely has had such a fluent, arioso spokesman, often making us think we audition Schubert rather than Beethoven. If the paradoxical notion of “disturbing serenity” can have any application, it informs the context of Chen’s rapt performance of this third movement. The meditative security that Chen creates and extends into the Largo of the last movement suddenly explodes into percussive and polyphonic rapture for the fugal Allegro risoluto, as joyously knotty and celestially playful as their stratified voices and syncopes will allow. The sheer bravura, dramatic tension, and emotional commitment of this Hammerklavier performance should win Mr. Chen many adherents. I wish those “immediate” believers at the Cliburn Competition could have withheld their applause and allowed the singular intensity of the last bars and fermata a bit more cosmic space.

The recital concludes with more compact but no less daunting examples of challenging pianism in Bartok’s Three Etudes of 1918. Motivated by the Debussy series of studies for the keyboard, Bartok sought to expand upon his own harmonic and digital resources with pieces that would punish the uninitiated. The Allegro molto carries that ‘barbaro’ element in Bartok to an extreme in spans and stretches for long periods. With its wicked trills and rippling arpeggios, the Rubato – Tempo giusto Etudeembraces the liquid side of Debussy and Scriabin while exploiting Bartok’s Magyar harp. At times, the sonority rivals aspects of Ravel’s Gaspard de la Nuit. The last of the Etudes (Andante sostenuto) juxtaposes incongruous or jarring rhythmic groups, inflected by potent accents and asymmetrical syncopations. Not since Charles Rosen has a pianist embraced these Etudes with such fervent accuracy and devotion, and Chen’s tone remains warm and luxurious as contrasted with Rosen’s icy detachment.