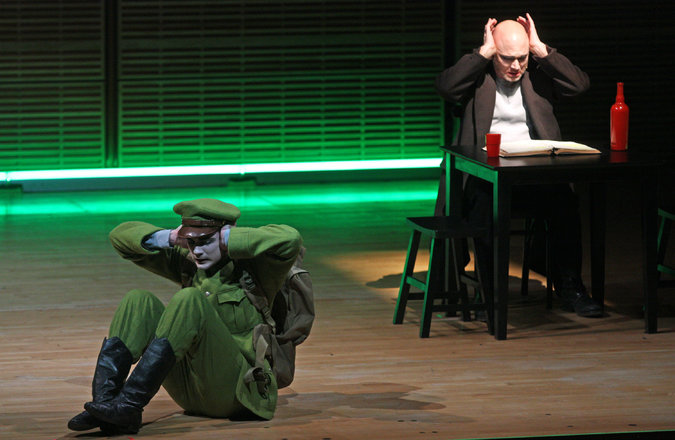 On Sunday night the Yale in New York series, now in its seventh season, presented a fresh, funny and aptly ominous staged production of “The Soldier’s Tale” at Zankel Hall, a collaboration between the Yale School of Music and the Yale School of Drama. The original French text, by C. F. Ramuz, was performed in a playfully poetic new English translation by Liz Diamond, who also directed. Every production team member and performer, including the acclaimed actor Michael Cerveris, who was the narrator, was either a graduate of Yale (like Mr. Cerveris), a faculty member (like the clarinetist David Shifrin and the violinist Ani Kavafian, who played in the ensemble), or a student in the music or drama school.

The tale tells of a Russian soldier, heading home on leave, who is enticed by the Devil to trade his beloved violin for a book that shows the means to making a fortune. Though the concept of this Yale production was nothing daring, the staging was so imaginative that this familiar work seemed newly powerful. The chamber ensemble gave a tart, incisive performance of the score, with not a bit of cuteness.