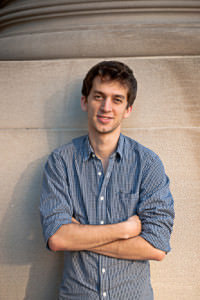 On January 13, 2014 the ASCAP Foundation awarded Stephen Feigenbaum special distinction for his 11-minute work for orchestra, My Shade, which he submitted to the 34th Annual ASCAP Foundation Rudolf Nissim Prize.

The award, which honors the memory of Dr. Rudolf Nissim and his dedication to to concert composers, is a prize of $5,000 in cash presented to the best score submitted. This year, there were nearly 270 entries. Nissim, a former head of ASCAP's International Department, established the prize, which is presented annual to an ASCAP concert composer for a work that has not been performed professionally.

Stephen Feigenbaum is an award-winning 24-year-old composer of music for the concert hall and the theater. When he was 19, his Serenade for Strings was recorded by the Cincinnati Pops under Erich Kunzel and released on a CD by Telarc. Stephen is a past winner of two ASCAP Morton Gould Young Composer awards and the Charles Ives Scholarship from the American Academy of Arts and Letters. In 2012, he won the Albany Symphony Orchestra's Composer to Center Stage competition, which resulted in a reading of his work and mentoring by John Corigliano. The National Public Radio show From the Top has featured Stephen as a composer, and he has appeared as an a cappella singer on The Martha Stewart Show and NBC's The Sing-Off.

Stephen's music has been heard at Lincoln Center and Le Poisson Rouge in New York, Jordan Hall and the Hatch Shell in Boston, the Green Room in San Francisco, and international venues. It has received performances by the JACK Quartet, TwoSense (Lisa Moore and Ashley Bathgate), and Grammy-nominee violinist Caroline Goulding. Stephen was the 2010 ASCAP Foundation Young Composer Fellow at the Bowdoin International Music Festival and is a past fellow at the Norfolk (Connecticut) Chamber Music Festival.

At Yale, Stephen created several theatrical productions that combined original instrumental music, stage lighting, elaborate sets, and media effects with loose narratives to tell musical stories that attracted diverse audiences. He also wrote the music for a full-length musical, Independents, which won an Overall Excellence Award for Overall Production at the New York International Fringe Festival in 2012. The show's music was commended in the New York Times (“the smooth sailing of the folkish tunes … evoking sea chanteys and a life of plunder”) and the Huffington Post (“consistently … sophisticated and hummable, ranging from sea shanties to romantic duets …”).