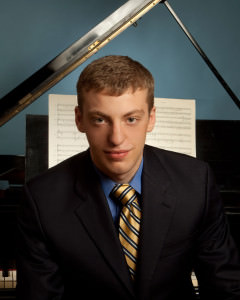 Chris Rogerson '12 MM is one of four composers selected to take part in the New Jersey Symphony Orchestra’s inaugural Edward T. Cone Composition Institute, in which they will receive coaching and career guidance, take part in master classes, and have world premieres of their work performed in concert.

The four composers will be the first artists showcased through the program. They were chosen from an international pool of 28 student and early career applicants. Composer Steven Mackey, chair of the Princeton University department of music, will direct the institute.

Rogerson is a doctoral fellow at Princeton University who previously studied at the Curtis Institute of Music and the Yale School of Music. He has held residencies at the MacDowell Colony and Yaddo. His music has been performed by the Kansas City and New World Symphonies and at venues such as Carnegie Hall and the Kennedy Center. Among his awards are the Charles Ives Scholarship from the American Academy of Arts and Letters and recognition from ASCAP, BMI, and the Theodore Presser Foundation.

“What is truly unique about this Institute is the multifaceted experience the composers will receive,” Mackey said in a statement. “The business of composing goes beyond the creative musical process, and at the Institute, industry leaders will illuminate key elements of publishing, promotion and other important practical issues these composers will encounter as they launch and sustain successful careers.”

The orchestra will perform one piece by each composer in concert at the Richardson Auditorium July 19. Their works may also be selected for future concerts during the regular season.

“We hope this will be the beginning of a relationship between these composers and the orchestra,” Lacombe said.