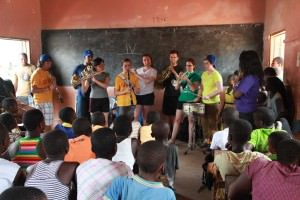 Yale Director of Bands Thomas Duffy returned from a momentous 12-day trip to Ghana with 51 students and Yale band and School of Music staffers on June 1, threw out all his clothes from the trip and left a day later for a week in China.

The delegation studied, performed and recorded traditional drumming and dance pieces with Ghanaian master drummers, the first time that some of the pieces have been performed in decades.

Students performed “unity” concerts at two universities and a joint concert with the National Symphony Orchestra of Ghana on May 23 to benefit the Ghana-Yale Partnership for Global Health.

Hours after returning, Duffy went to China with Linda Pellico of Yale’s Nurse Practitioner Program because he created an intervention to teach nurses how to use a stethoscope.

“I’m doing lots of work with medical people,” Duffy said Tuesday, after returning from China Sunday night, “because all the things that have to do with frequency or periods (of a sound wave) have to do with music, and I’m trying to subordinate music as a learning tool for people who have to listen to body sounds.”

That program is cutting in half the time it takes someone to gain competence on a stethoscope, Duffy said, and the Chinese seem eager to adopt it.

But back to Ghana.

It’s not the Yale band’s first trip around the global block, as it were.

The concert band has been travelling internationally every two years since Duffy came to Yale in 1982. Originally it was to export American band music and come into contact with other cultures, he said. But quickly elements of social philanthropy were added — a concert to raise money for the Hamilton Cathedral in Bermuda, another for Ethiopian famine relief.

This one had plenty of that element too.

“We brought the six grad students from the percussion studio and we had two sessions where they were immersed ... in the world of African drumming. And we had two two-hour tutorials that were filmed to teach the novices how to do African rhythms (which every child in the village of Yamoransa can do). And when we heard them, we’d be capping the beat only to realize we were wrong. That’s how fundamental it’s different.”

Duffy called the give and take “the most genuine reciprocity I’ve ever seen” as the band played and spoke in villages and at the national theater in a Ghana/Yale HIV initiative.