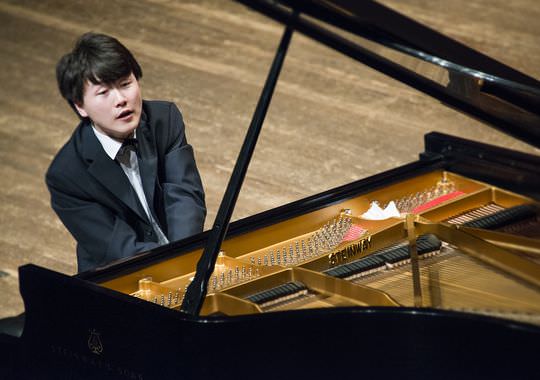 Feng Bian '15 MM was awarded a bronze medal in the 2014 World Piano Competition. The competition was held June 23–28, 2014 at the University of Cincinnati College-Conservatory of Music (CCM).

This year the competition awarded one gold and two bronze medals. Feng Bian studies with Peter Frankl at the Yale School of Music.

The mission of the World Piano Competition is to promote and celebrate the art of classical piano music, inspiring artists and audiences. The competition is presented in partnership with the Cincinnati Symphony Orchestra and CCM.

Born in Chengdu, China, Feng Bian began piano lessons at the age of 6 and entered the Sichuan Conservatory of Music in 2001. He finished his bachelor’s degree and Artist Diploma at The Colburn School and is now a first-year student in the Master of Music degree program at Yale School of Music.

In addition to classical performances, Mr. Bian has performed with leading jazz musicians such as Ron McCurdy on the Lin Jinhui project in 2011. In 2012, he performed Mozart’s C minor piano concerto with the Colburn Orchestra and Culver City Symphony Orchestra. In 2013, he was invited to play with the award-winning Saguaro Trio. Later that year, he was invited to give the opening recital for Cochem Internationaler Klaviersommer in Germany.

Mr. Bian has also participated in several music festivals, including Morningside Music Bridge, Sarasota Music Festival, and Holland Music Sessions. Mr. Bian has received numerous prizes and awards in his native China, as well as a 2004 Yamaha Scholarship. He won the First Prizes of the California Division of MTNA and Parness Young Artists Concerto Competitions, as well as an Encouragement Prize at the 2012 Sydney International Piano Competition.