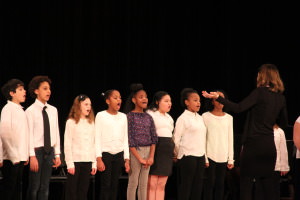 This past Saturday, the auditorium of Wilbur Cross HS was filled with holiday cheer, as well as audience cheers, as the All-City Honors Ensembles took the stage for their first ever Winter Concert.

Following the opening performance of "We Need A Little Christmas" by the Children's Choir, Lead Teacher Rubén Rodríguez '07MM welcomed the families in the audience, proclaiming that, "Today, your kids are not asking you for toys or presents, but rather, they are giving you the gift of music." 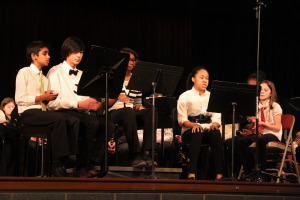 In addition to participating in the large ensembles, the band and orchestra students recently started rehearsing in chamber music groups. One of these new chamber groups, the All-City Honors Percussion Group (pictured right), made their performance debut at the concert, performing the body percussion piece "Rock Trap" by William Schinstine. More chamber groups will debut at the Ensembles' upcoming concerts on March 28 and May 30 at Sprague Hall.